The first dungeon crawler I played was Dungeon Master on the Commodore Amiga. I loved the game and enjoyed games such as Eye of The Beholder or the recently released Legends of Grimlock immensely. Deepfall Dungeon is a free game for Windows that brings back some of the memories. While it uses a slightly different mechanic than the mentioned games, it does use many of the same game mechanics that make dungeon crawlers awesome.

You can't create characters during the beginning which is somewhat of a let-down as it would have been great to juggle around a couple of stats to tweak the character a bit. If you want, you can play through a tutorial level first which introduces you to core game concepts. The most important controls are WASD to walk in the selected direction, QE for turning 90 degrees to the left or right, space for picking things up, m for opening the large map, c for showing the character sheet and the 1 to 4 keys for drinking small or large health or mana potions. You can alternatively click with the mouse on control buttons in the lower right corner.

It may make sense to play the tutorial level anyway as you get a couple of items and some combat experience in the process which may help you later on.

You do not see any enemies on the screen which may be a bit weird at first considering that even Dungeon Master showed them walking around in the dungeon. It is similar to encounters in Bard's Tale. Here combat seems to be a random event that takes place in a turn based mode that you may know from Final Fantasy VII for instance.

You and the enemies you face have action bars and once they are filled up, can select an appropriate action from the menu. You can physically attack the enemy with whatever weapon you have, cast spells, use a skill or run when you are about to die. 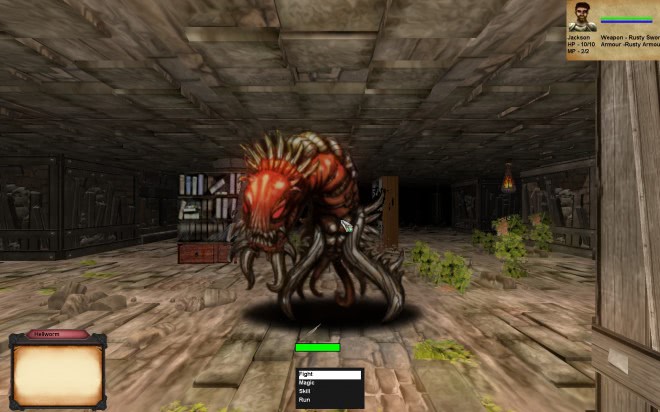 Each encounter provides you with experience which you need to level up and grow stronger.  The standard game has 20 different levels for you to explore. When you descend you enter a shop automatically to restock supplies or buy weapons and pick a skill afterwards.  Keep in mind though that you can't go back up once you are done so you better make sure the current level is explored before you do so.

Deepfall Dungeon is fun for a while until you realize that there is not really that much to do after all. You explore a dungeon level, fight monsters, collect treasures and go on to repeat the same on the next level. The game has no story that provides you with background information, for instance why you are in the dungeon.

With that said, the game is showing promise and if the author of it could add a story, a couple of character generation options or a selection of pre-generated character types to choose from, plus some variety in terms of what you do on each level, it could become a great game to play. That does not mean that it is a bad game and there are certainly some users who will enjoy playing it.