If you have Steam installed chance is that you have at least one, more often than not a couple of games installed on your system as well.

These games may take up a lot of space on the drives they are installed on and there does not seem to be a lot you can do about it other than uninstalling games, making sure you install them on other drives or moving the installed games to another location.

If you do not need Gigabytes of free space there may be another option for you to free up some disk space on drives Steam games are installed on.

Update: The most recent version of TikiOne Steam Cleaner supports Steam, Origin and Gog installations. If you prefer a client that does not require Java, try Steam Cleaner instead which is open source and supports Nexon, Battle.net and UPlay as well.

TikiOne Steam Cleaner is a free program for the Windows operating system that you can run to clear so called redistributable packages that are often found in game folders.

These packages are run once when the game is started for the first time but are not needed after first run anymore. The Steam Cleaner application takes advantage of that by giving you options to remove those files and folders from the system to free up disk space.

Note that the program requires Java to run. Since Java is not safe to use right now, I suggest you either unlink Java from the web browser or use a portable version of Java instead.

When you run the program it automatically tries to pick the folder Steam is installed in on the computer. You can change the folder if it is not the correct one. A click on search scans all installed games and apps on Steam and displays the list of redistributable packages in list form afterwards. 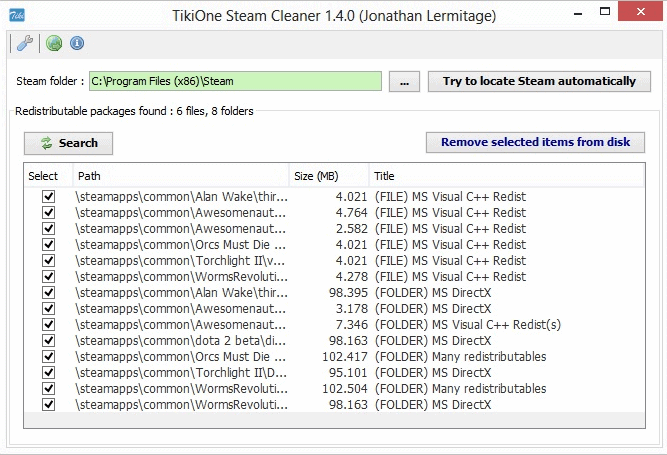 There you see the path it is stored on, its size and which package it is. The path will also reveal the game it has been installed for. On my system, the packages used about 600 Megabyte of storage space.

This may not seem like much if you have Terabytes available, but on a 256 Gigabyte drive it is noteworthy considering that I currently have only five or so games installed on the system.

If you happen to install lots of games, you may cross the 1 Gigabyte mark easily.

A click on remove selected items from disk deletes the folders and files to free up disk space. If you have installed so called episodic games, for instance adventure series like Sam and Max or The Walking Dead, you may notice that each episode installs its own package on the system weighting about 100 Megabyte each.

You can make a couple of changes in the program options. There you can change the maximum scan depth, the interface language, and whether you want log files written or not.

Steam Cleaner can come in handy if you are in desperate need to free up some disk space. The more games you have installed the larger the gain in disk space after running the program. While 600 Megabytes or 1 Gigabyte may not sound much, it may very well be on PCs with little free disk space.

You can clean the folders manually as well obviously if you prefer not to run an application to do so.

If you don't want to use Java applications try Steam Cleaner instead which I linked at the top.