Display background information about people of interest in Firefox

Summer is a new add-on for the Firefox web browser that displays background information about people of interest in the browser. It is a direct port of the Google Chrome extension of the same name. When you visit a website that is supported by Summer, and the list of sites include popular destinations such as Time, Wikipedia, Yahoo, New York Times or BBC, you will notice a small icon at the top right corner of the site that moves with the page as you scroll. It appears after the page has loaded - sometimes taking a couple seconds to appear - and acts as an indicator that a number of references have been found.

A click on the icon turns the icon into a sidebar of sorts that displays the people that the extension has found on the page. The name and a photo is provided for each person, and a click on one of the listings loads detailed information about the person in the sidebar.

There you may find a short biography, current position and job, videos on YouTube about the person, Twitter messages and related news. The bottom may also list additional links, for instance to the official homepage on the Internet, a Wikipedia entry and social networking profiles. 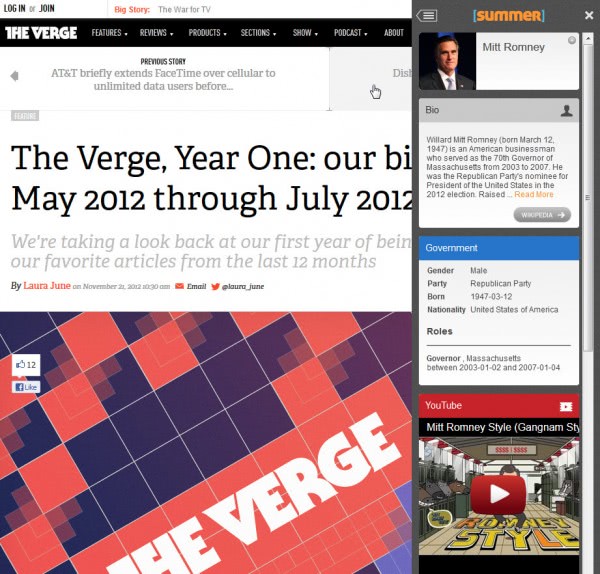 What's interesting from a tech side of things is that it supports several popular tech news sites including The Verge and Techcrunch. Other categories that are covered by Summer are general news, sports, entertainment and business with news making up the bulk of supported sites followed by entertainment and then technology.

The sidebar icon is rather unobtrusive even though an option to hide it on a particular page or website is missing.Â  The selection of sites is made up exclusively of English websites, and all information presented are also in English only. Another thing that is missing is the option to look up company names as well which I imagine would be quite useful in this context. Still if you are often reading news on one or multiple of the supported sites and would like to look up background information about people mentioned in the articles, then Summer can be quite useful in this regard.

Update: Summer is no longer available. Both the Firefox add-on and the Google Chrome extension have been removed from the stores.

Firefox users can check out People Lookup for the browser. While it does not display information right away, it offers to look up people on the Internet.