Google has been pushing new updates to the Play store for Android at a rather fast pace lately. Â Just in the past few weeks we have a seen move to version 3.9.16, which was followed quickly by an update to 3.9.17. Now, on the heels of those two updates, Google is rolling out the latest release, this time jumping to 3.10.9. Â This isn't the major update that 3.9.16 was, but it still brings some interesting new features.

First, there isÂ a new screen that pops up after you start installing a new app. Â The screen is different than the one we are all used to seeing during app installation and it also displays a "Users Also Installed"Â list of apps that is handy for discovery. Â When the installation is complete a "Keep shopping" button pops up. 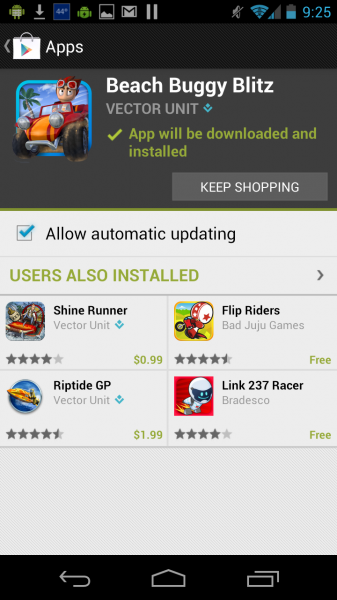 Second, there is now a "Remove" icon (a circle with a diagonal line through it) displayed in the Wish list that came in the 3.9.16 update. Â That is certainly a welcome update.

Finally, there is now a "Translate" button next to apps that include a description that isn't in your native language. Â This is much the same as the translate option that appears under the menu bar when using Chrome to visit a foreign site. 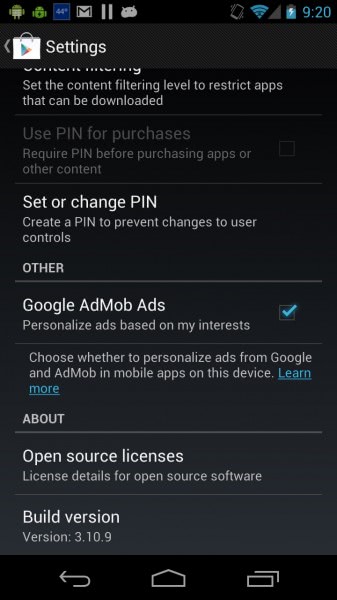 The new Google Play is 300 KB larger than the last installation. Â According to reports, that is due to the insertion of aÂ library Google has bundled in calledÂ keyczar. Â It's described by the makers as "an open source cryptographic toolkit designed to make it easier and safer for developers to use cryptography in their applications. Keyczar supports authentication and encryption with both symmetric and asymmetric keys." Â This is also included in Google Wallet.

The update, like all Google Play, and many other app updates, is rolling out gradually. Â However the .APK file is already available if you don't want to wait. Â You can download the file to your phone for direct installation or you can put it on your computer and plug your handset in and go from there.

Previous Post: « Use Plan B to find your stolen or lost Android phone
Next Post: « Turn off Android 4.2's Lockscreen widgets