The Samsung Galaxy Note II from a webmaster perspective

I recently upgraded to the Samsung Galaxy Note II after two years of using a Samsung Galaxy Wave for nothing but phone functionality and SMS messaging. I wanted to switch to a smartphone that I could use for webmaster related tasks and for Android apps tests and review to post them here on Ghacks.

Several factors played a role in my decision to buy the Galaxy Note II and not an iPhone, Galaxy 3 or any of the other phones out there. First, it features a large screen that allows me to read emails and access websites without having to use the zoom in or out buttons, something that my last phone could not really do at all, and that other phones with smaller screens are not that good in either. 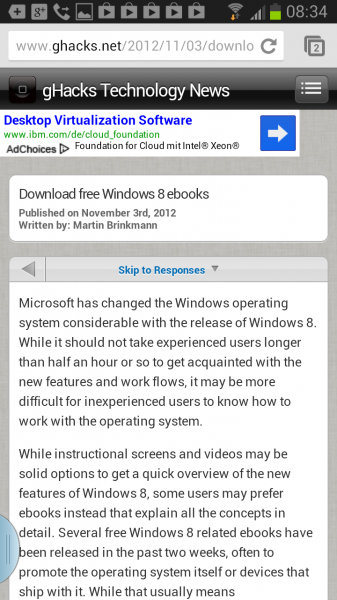 The big screen enables me to use it more effectively for webmaster related tasks. The WordPress app for Android for instance provides me with a dashboard that I can use to moderate comments, write new articles or do other administrative tasks. And since the screen is bigger than on other phones, I see more contents on the screen at the same time. The phone, even though it is quite big, is comfortable to hold. One downside here is that you can't control all buttons and options with just the hand you are holding the phone.  I guess, if you have really large hands you may be able to reach all of the controls, but I can't. That's however more a question of how you use the phone, and I never really needed to use a phone with only one hand before. There is also a one-handed mode app that you can use, which aligns controls on the right side so that they can be reached more easily.

The S-pen was the second feature that I was particularly interested in. I was not really sure what to expect, but had hopes that it would allow me to use the pen to enter text faster or even use it to write WordPress articles while on the go. Text recognition is quite good, at least when you write in your phone's system language. You do however have to verify to make sure the character recognition got it right, and that's the main thing that is slowing you down.The other thing that is slowing you down is the fact that you have to stop between words when you are writing with the pen. It is also not possible to write as fast as you would do on paper or when using the on-screen keyboard which is disappointing.

The pen is not useless though, and that's for the following two reasons: 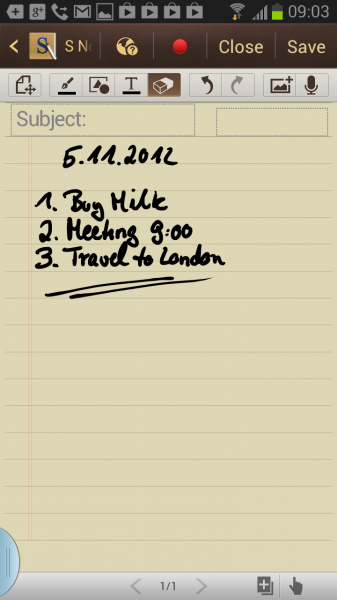 In regards to the pen, there is one design decision that I do not understand. The menu and back buttons on the phone can't be activated by the pen. The home button is different but still awkward as you have to apply pressure to trigger its functionality. The two buttons are touch buttons which won't activate at all if you touch them with the pen.

The 3100 mAh battery offers lots of juice to get you through the day, especially if you turn off unneeded features and dim the screen.

The Galaxy Note II is a worker's phone, at least for me. It may not look as shiny as the Galaxy 3 or the iPhone but that's not really what it is all about. It's large screen, pen and battery make it an ideal companion for a long work day, when you are on a business trip or a day-long meeting.

I have to admit that I do not use it to phone, at least not a lot. If you phone regularly you may find it a bit awkward for that purpose as it is quite big. While it is not really heavy, it looks kinda like you are holding a brick to your head.

Previous Post: « Why Google Nexus devices do not have SD card slots
Next Post: It's Been a Big Week in Android World »