How to download full versions of the Firefox web browser

Mozilla is currently preparing a web installer for the Firefox web browser that will be offered to interested users on the browser's main download pages instead of the full version download of the browser. The intention here is to make things simpler for interested users as they do not have to make sure anymore to pick the right version of the browser for download. The web installer ensures that users always download the latest version of the browser to their system. When 64-bit versions of Firefox become generally available, the installer will also ensure that the correct version is installed on the system.

If you open the Firefox Beta download page right now, you will notice that Mozilla is offering the web installer here on the main download page. Firefox Beta Stub Installer.exe has a size of 217 Kilobytes right now. It may come as a surprise that the first screen that you see when you run the installer highlights that it is the Nightly Setup and not a Beta installer. 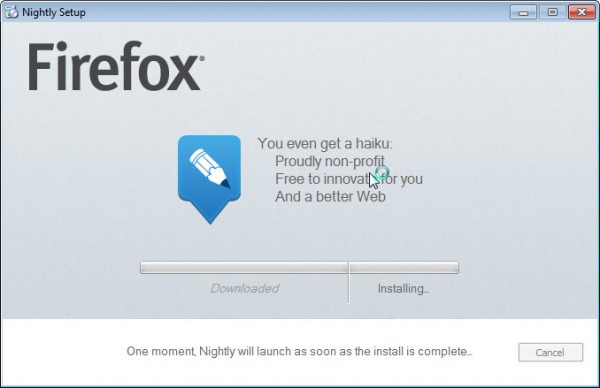 It feels kinda strange that the web installer has only been made available for the beta version, and not the Nightly or Aurora versions of the browser prior to that. That, and the fact that the installer spawns a Nightly setup is a strong indicator that Mozilla may have messed up here.

Update: A quick test reveals that this is indeed the beta installer, and that Mozilla failed to replace Nightly with Beta in the installer. It is not recommended to run the installer on a system where a Nightly version of Firefox is installed on, as it may downgrade that version to Firefox Beta during installation.

As it stands now, and remember that this can change in the future, you have got two options to download full versions of Firefox instead of the web installer.

Your first option is the Systems & Languages link displayed underneath the download button on the Firefox download page.

A click opens a list of all localized Firefox versions for all supported operating systems. These link to the full versions of the web browser and not the web installer.

The second option is the Mozilla archive website where you can download full versions of Firefox as well. The link leads to stable downloads of Firefox. If you want beta, aurora or nightly downloads, navigate to the appropriate directory on the ftp server.