IObit StartMenu 8: brings back the start menu to Windows 8

If the number of programs that bring back a start menu to Windows 8 is any indicator, I'd say it is pretty certain that these programs are in high demand right now. It is likely that their popularity will gain another boost when the operating system gets officially released on October 26 by Microsoft.

Start8, my favorite application, will be available for $4.99, and I'm seriously considering paying the money for it to get a start menu back in Windows 8. The alternative Classic Shell is not a bad program either, but it currently does not include Windows Store Apps in search.

IObit StartMenu8 is another alternative that has been released as a beta version recently. It is not clear right now if the program will remain free when the final version is released or if it will be turned into a commercial program just like Start8.  For now, you can freely download the program from the program website to add the start menu back to Windows 8.  The license type freeware indicates that it is likely that it will remain free. 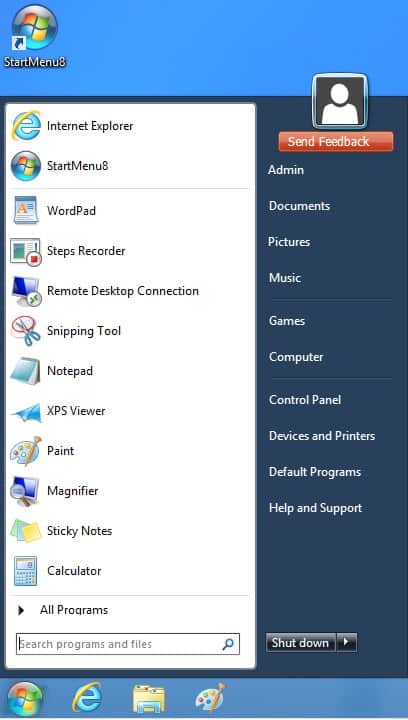 The start menu looks nearly identical to the start menu of the Windows 7 operating system. You find the programs on the left, a search, shut down button and links on the right to core locations of the system. Modern Store Apps are not included in the start menu or the search results yet even though it is listed as a feature on the program page.

The program can become a viable alternative for Start8, provided that IObit manages to add Windows Store Apps to the start menu and search. (via Into Windows)

Update: It appears that you can open the start page by holding down the Windows key for a longer period of time.

Update 2: IOBit has released a first beta version of StartMenu8 2.0 which introduces several new features, including improved support for Windows 8 and the search module, options to deactivate the hot corner and sidebar function, user customization features and the fixing of general bugs.

Martin Brinkmann is a journalist from Germany who founded Ghacks Technology News Back in 2005. He is passionate about all things tech and knows the Internet and computers like the back of his hand. You can follow Martin on Facebook or Twitter
View all posts by Martin Brinkmann →
Previous Post: « ExploitShield: new anti-exploit software for Windows
Next Post: Download Microsoft Tech Event videos with MIXer »