Up until now Windows Store offered a straightforward experience. The store front displays a number of categories that you could click on to be taken to app listings. Here you'd then see desktop and Windows Store apps offered in the store. While Windows Store has its issues, it works reasonably well most of the time.

If you have browsed the new apps listing recently you may have noticed that software catalogs, or store inside a store apps, have made their appearance on Windows Store.

Intel's AppUP Center is an an app that makes available the same functionality as the website and desktop program the service has been offered on for the last couple of years. The Windows Store app lists free and paid programs that Windows 8 users can download to their PC. You will find several identical offerings in Windows Store, with games like Fruit Ninja being offered both in the Intel sub-store and the main Windows Store. There is a difference though; the Intel store redirects you to the Intel AppUp website where the apps are downloaded as program executables. 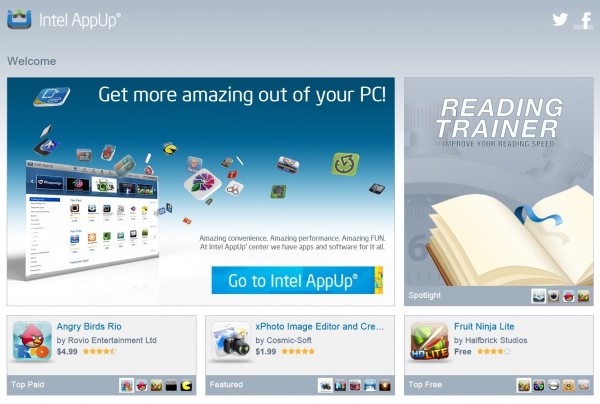 Why that is important? Windows Store apps get installed automatically, and when updates become available, the updates too. The programs offered in the Intel store app on the other hand are desktop programs that work on all recent versions of Windows. Payments too are not handled via Windows Store but using Intel's own payment system integrated into the apps.

Intel is not the only company that has added a sub-store of sorts to Windows Store. The major software download portal Softonic too has added its own app to the store that uses a very similar system. The app highlights applications when installed and launched, some with reviews, others without, that all lead to the Softonic website where the programs can be purchased or downloaded, depending on whether they are commercial or freely available. 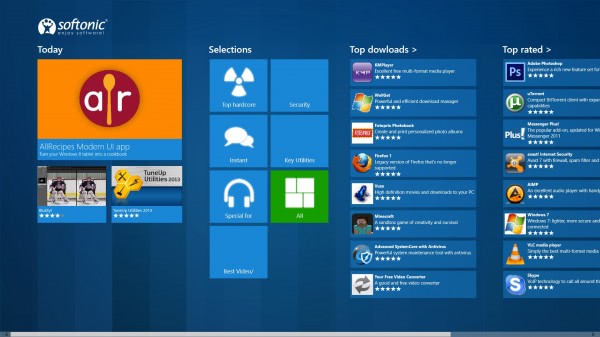 Both catalog apps highlight desktop apps exclusively. That's not necessarily a bad thing, but definitely confusing at first, especially if you stumble onto dupes here. Users need to be aware that these store fronts act more or less independent from Windows Store. While they are available and installed in the store, that's really the only connection there is.

It is likely that other download portals will push their apps to the store as well, and Microsoft should consider adding a separate category for these kind of apps to avoid confusion and intermixing with regular store apps.

The main question though is if anyone needs those store in a store apps. Only time will tell, but considering that they do not use the store ecosystem at all for downloading, updating and payments, and the fact that these stores are only a click away on the web, one has to ask whether there will be demand for these kind of apps.

Previous Post: « Can't decide what to watch? Try Pick Me for Windows
Next Post: « Change how often File History saves copies of files in Windows 8