Windows Store has its issues

I have been playing around with the RTM release of Windows 8 for some time now and have spend some of that time browsing Windows Store. Windows 8 is the first Microsoft operating system that ships with a built-in store that is going to make Microsoft richer and providing users with access to a secure location to download software.

Windows Store uses the modern user interface that Microsoft put emphasize on. This becomes apparent when you open the store, as it is using large rectangles to highlight apps available in it. While that is nice and shiny, it seriously limits the number of apps displayed on the screen at the same time.

Only eight apps are displayed on a 1920x1080 monitor, not a lot considering that the store is already hosting more than 1300 apps. It takes ten taps on the page-down key to scroll through all store categories on the front. 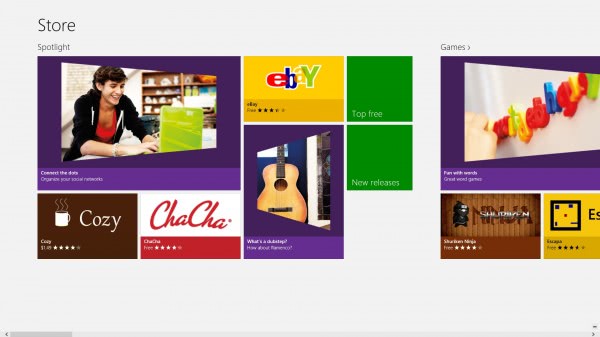 A click on a category name, as opposed to a click on top free or new releases, displays all apps of the selected category in a more appropriate format. I'm not saying that the format is ideal, considering that the display is rather colorful and distracting as each app listing uses the apps' dominant color as the background. 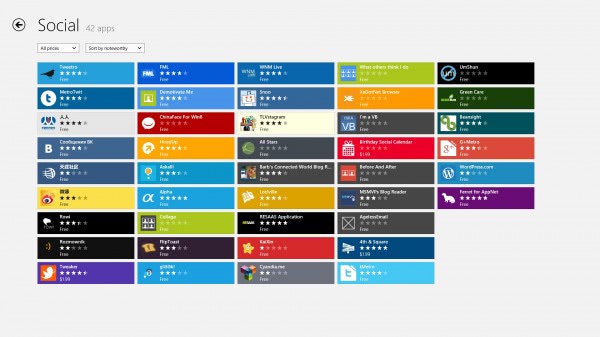 Imagine having to browse through hundreds or even thousands of apps that are displayed in this way. A possible solution is an - optional - display mode that displays the entries in list form with less colors.

That's however not the biggest issue that I have with the store. 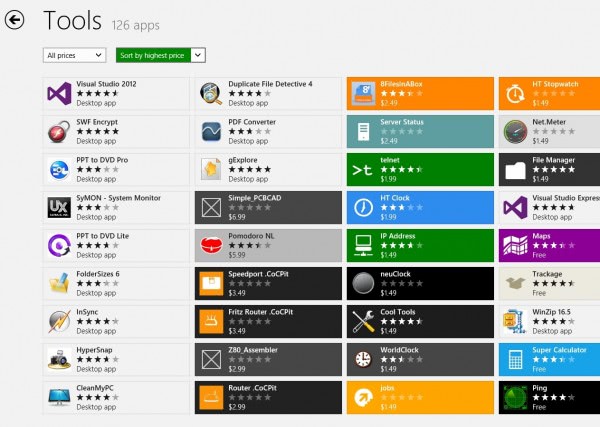 Desktop apps do not appear to be sorted by price, as you will find some listed among Windows Store apps even though they are more expensive than apps listed in front of them.

About that. I still do not know how items are sorted in the store. Are apps sorted in columns or rows? The most popular app is the one in the top left corner, but the second most popular app? Is it the app on the right, or below?

Sort by highest rating appears broken as well when you search for all apps listed in the store. How you do that? You bring up the Charms Bar with Windows-C, click on Search, and enter * as the search term. When you sort all apps by highest rating now, you will find apps with no rating listed near the top. 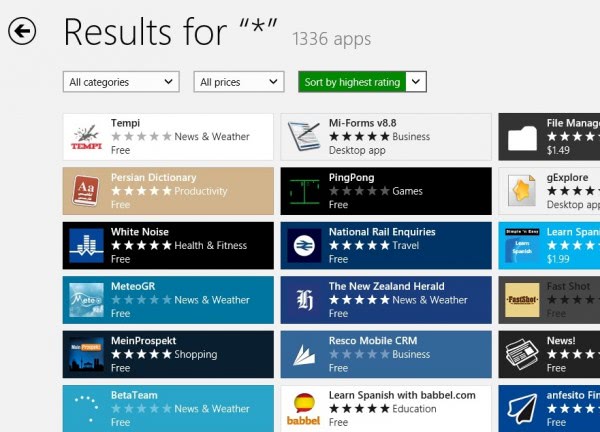 It has already been reported earlier that the highest rating algorithm is only considering an apps' average rating, so that an app with one rating of five, and thus an average rating of five, the highest possible rating, is displayed in front of apps with more ratings if only one of the ratings is below five. This is for instance the case for the game Ludo with 13 ratings of which one is 4, while the remaining 12 are 5.

This can be easily resolved by requiring a minimum number of votes before apps are included in the highest rating list.

Unrelated to that is a feature that I'd like to see implemented: the option to type in the store to find or sort apps listed here automatically, and without having to use the Charms Bar to do that. It is not clear why Microsoft has limited instant search to the startpage only.

Have you played around in Windows Store yet? If so, what is your take on it so far?