Decision 2 is a strategic action game. Your main task in the game is to recapture a city that has been taken over by zombies. The city itself is divided into sectors that become available as you progress in the game. You start with just a pistol in the first sector and face basic zombies here. The game switches to a strategic map of the city in which you can upgrade your arsenal and plan your next moves.

The game offers some variety when it comes to the action part. This depends largely on the tasks that you select on the strategic map. Tasks range from recon and clean-up, to capturing towers and factories to establish a stronghold in the sector.Some missions cost money which you need to factor in to your planning phase. While you could spend all of your money on weapon upgrades and such, you'd then be left with basic missions that do not really provide you with enough resources in the long run.

A captured factory provides you with money, a captured tower with access to adjacent areas that you can start to explore then. 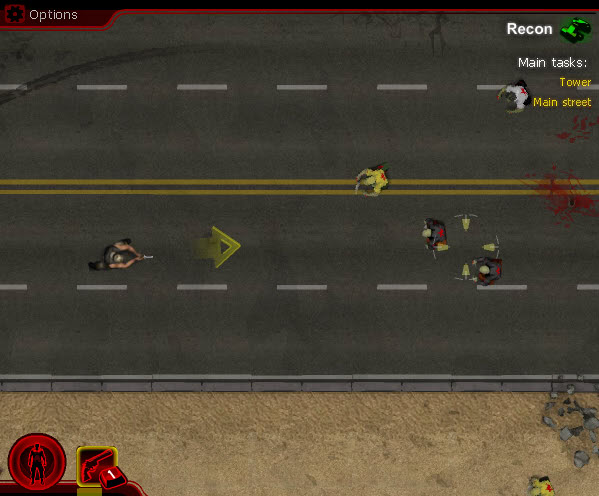 The action part plays from a top down perspective. You move your character around with the WASD keys and use the mouse to aim and shoot. If you have added weapons to your arsenal you can quickly switch between them with the number keys. The reload key has been mapped to r.

You meet only weak non aggressive zombies during the first maps, but that changes fast and you begin to encounter armed zombies or zombie dogs that are pretty fast.

You can complete extra tasks on most maps, like killing all zombies, to earn extra cash which you desperately need to improve your existing weaponry, buy new weapons or other upgrades.

Weapons need to be unlocked in order, starting with a shotgun and ending with grenades at the very bottom. Each weapon can be upgraded multiple times, twice to a new weapon model with additional firepower, and four times with extra ammunition or damage. The Colt you start with for instance can be replaced with a Beretta first and at the very end with a Desert Eagle. Weapons in addition have  a level of their own that improves when you use them in combat.

But weapon are not the only items you can buy here. You can also improve abilities like increasing your characters stamina or agility. The engineering skill is special as it lets you improve your factories and towers beyond level 1.

The game gets more difficulty as you progress through the various sectors of the city. You will encounter different types of zombies, like exploding zombies or zombies that jump at you from a long distance. That, and the different weapons and upgrades will keep you entertained for some time. In the end though, there is not enough variety and maps start to feel repetitive after some time.

Still, if you are looking for an action game with strategic elements that include zombies and all that good stuff, then Decision 2 may be just what you have been looking for.