I have to admit that I never played Minecraft, even though I always wanted to. But since it is such an important and popular game, I know what it looks like and offers. Delver's visual style has lots of similarities with its 8-bit or 16-bit charm that some like and others hate.Â  If you are more the gamer who likes realism and high end visuals, then Delver is not the game you are looking for. If you do not mind if a game is fun to play and offers some excitement, then Delver may be a game you want to take a closer look at.

Technicalities first: You need the Java Runtime Environment installed on your system before you can run Delver on your computer. The game is available for Windows, Linux and Mac, and Android devices. Once that is out of the way you can start the program right from the location that you have downloaded it to.From here, you are thrown right into the game and a random starting position. 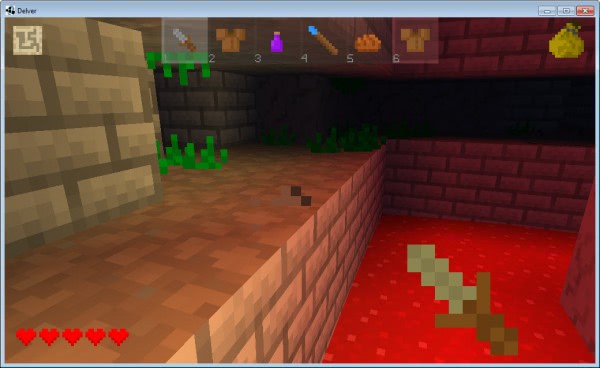 Delver is a game of exploration, combat and staying alive, and if you ever played Ultima Underworld, you find some resemblance here. You basically explore a dungeon, find items that help you one way or the other, avoid traps, defeat or avoid enemies, level up, and try to stay alive. You move around in the game with the WASD keys, look around with the mouse, use the left mouse button to attack, the e key to interact, and the q key to drop the selected item on the ground. Your inventory is limited to six hotkey spots which means that you will have to do some juggling around every now and then when you find exciting new items as they land right in your bag when you pick them up. You can open that bag with the i key. And before I forget, you can open a map with m that lays over part of the screen and stays visible until you press the key again.

The game is offered as an alpha build by the active developer who is releasing new versions of the game regularly.Â  You should not be too worried about the game's alpha status though, as it offers a pretty stable gaming experience, at least on Windows where I have tested the game on.

If you like Ultima Underworld or rogue-like games, then Delver may be a game you have been waiting for all those years.Â  It is great fun to play and gets increasingly difficulty once you go down ladders to enter deeper parts of the dungeon.