Windows sometimes displays a restart prompt when you install new software or update existing programs and applications on the system. And if you are into Registry hacking, you may also have noticed that the changes and hacks that you make do not become available right away most of the time.

While you could reboot your PC, or log off and on again, it is often enough to kill the explorer.exe process of Windows Explorer for the same effect. Just use Ctrl-Shift-Esc to open the Windows Task Manager, locate explorer.exe in the list, select the process, click on end process to kill it, then on File > New Task (run) and enter explorer.exe here to start the process again.

That's definitely faster than having to restart the system or log off and on again. If you are in a hurry, have to kill explorer.exe regularly, or simply prefer a one-click solution then the following shortcut to kill and restart Windows Explorer may be what you are looking for.

To create the shortcut do the following: 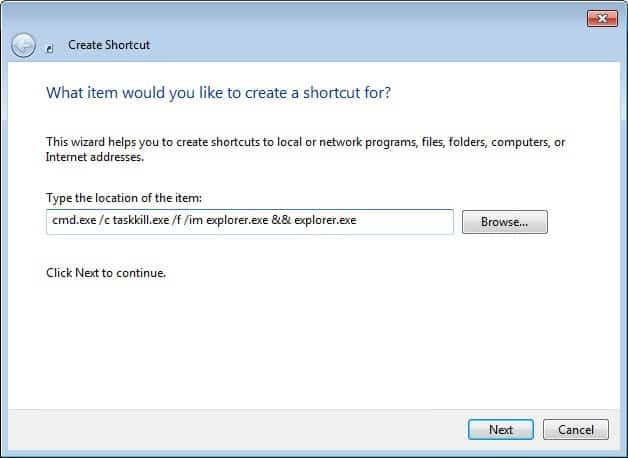 When you run the shortcut afterwards, it basically executes the taskkill.exe command that is used to kill explorer.exe, and when that is done a new instance of the Windows Explorer process will be started again. You are probably interested in the parameters:

You will notice that the command window stays open after the commands have been executed which is an unfortunate side-effect of the method.

Update: As Cohesus mentioned in the comments, it is possible to bypass the command prompt window by adding start to the command. The command listed above has been adjusted accordingly, the screenshot is still showing the restart command without the start command.

Previous Post: « Highlight the mouse cursor to locate it on the screen
Next Post: Metro's new name is Windows 8 »