Many websites and services make use of Google Analytics, a web statistics service that is tracking web users on websites where the script is installed.

Besides the tracking, there is also the aspect of loading times that are affected by the script.

Web users who do not want to be tracked, or want sites to load faster, may want to consider blocking the Google Analytics script from running on sites they visit.

Firefox users can use the excellent NoScript add-on for that, which takes care of both issues. Chrome users can install comparable solutions like NotScript or ScriptNo. Some may however feel that they interfere to much with day-to-day web browsing. 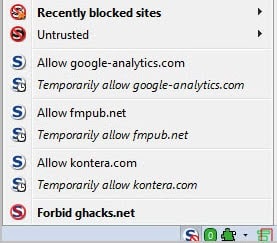 The Google Analytics Opt-out Add-on for the Chrome browser may not be the perfect solution, as it only tackles the tracking problem but not the loading of the script itself, but it does not interfere with other scripts running on the site.

The Chrome extension has been created by Google, which may be the reason why the script is not blocked outright. According to information posted on the Chrome Web Store, the add-on "communicates with the Google Analytics JavaScript (ga.js) to indicate that information about the website visit should not be sent to Google Analytics".

It basically means that the script is loaded, and that the add-on notifies the script that the visit should not be tracked.

Another solution that is working universally on the system would be to block Google Analytics in the hosts file. Simply add the following two lines to your hosts file:

On Windows, the hosts file is located in the C:\Windows\System32\drivers\etc directory. Just open it in a plain text editor like Notepad, and add the two rows to the end of it. This basically redirects requests that websites make to Google Analytics servers to the local system where the script can't be found. Webmasters should keep in mind that this may prevent them from accessing the Google Analytics website.

Martin Brinkmann is a journalist from Germany who founded Ghacks Technology News Back in 2005. He is passionate about all things tech and knows the Internet and computers like the back of his hand. You can follow Martin on Facebook or Twitter
View all posts by Martin Brinkmann →
Previous Post: « Google News Reader, Read Custom News In Chrome
Next Post: eHistory adds advanced Search Operators to Chrome's History Page »