Huib Kleinhout on behalf of the Opera Desktop Team made an announcement regarding the future of two of the Opera web browser's add-on platforms. Starting with Opera 12, both Opera Unite and Opera Widgets will be turned off by default for new users. The change at this point in time is not affecting existing users of either one of the services. The overall plan however is to retire both Opera Unite and Widgets later this year.

Opera Unite adds web server capabilities to the Opera browser. We have reviewed the feature back in 2011 as part of our Discovering Opera series that look at some of the unique features of the Opera browser.Â  Opera Unite basically turns the browser into a server, so that Opera users can share and publish contents directly without having to rely on third party services to do so. A basic example would be to make your music library available on the Internet along with a media player, or file sharing between colleagues with the files being hosted on your computer. 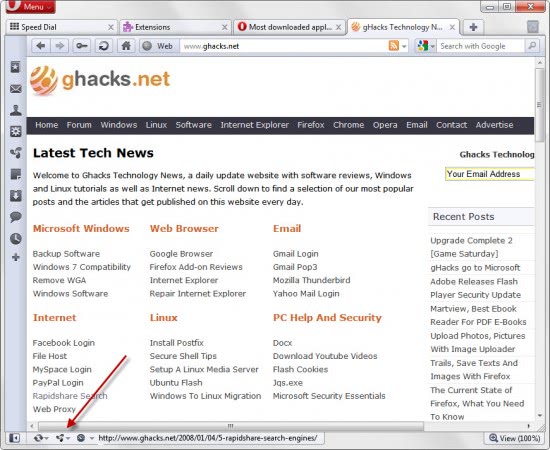 Opera Widgets on the other hand were Opera's initial way of providing developers and users with browser extensions. Widgets ran into their own window, which was without doubt one of the biggest things that held them back.

Now with the integration of extensions into Opera, comes a consolidation of services.Â  The Opera Add-ons team puts it this way:

Over the last six years we have learned a lot from our work on Opera Widgets and Opera Unite, and when we later built the extension platform for Opera 11 we benefited significantly from this experience. Our extension technology has been a great success, with millions of monthly downloads, and so far completely dwarfing the other platforms. Recently, Opera also shipped a labs version with extension support in Opera Mobile, investigating a fully cross-platform extension environment.

Moving forward we want to focus on one high quality Add-on platform across our products, rather than spending resources on maintaining legacy systems. The know how and and technologies from Unite and Widgets are already being reused in other Opera products. An example is the recently announced UPnP support in Opera Dragonfly.

While it seems understandable that Opera retires the Widget add-on platform, as it has been replaced more or less by extensions, it is not really that clear when it comes to Unite. Usage statistics seem to indicate that resources are better spend on the new extension's platforms.

What's your take on the new development?