When it comes to social networking sites like Facebook, Twitter or Google Plus, you will find that friends on those networks fluctuate over time. While you will keep in regular contact with a core number of friends, there are others that may stop using the service completely after some time.

Some see inactive users on social networking sites as dead weight that they need to get rid of. For others, it is not a big issue at all. While inactive users may make the active user selection on those sites more difficulty, for instance to send someone a private message, it is usually nothing that gets too much into the way.

It may be different for Google+ users who are reaching the 5000 friend limit on the site, as they can't add new friends on the site anymore if they have reached that limit. Removing inactive users is one option to reduce the friend count again.

Google+ users who want to unfriend, or uncircle as it is called on the social networking sites, inactive users can do so with the new Chrome extension Uncircle Inactives+.

The extension can scan all or select circles on the Google+ website for inactive users. When it is installed, it places an icon in the browser's address bar. A click on that icon opens a local page that is checking if you are currently logged in to Google+. If you are not, you are prompted to log in first, before the list of people that you are following is displayed in the interface. 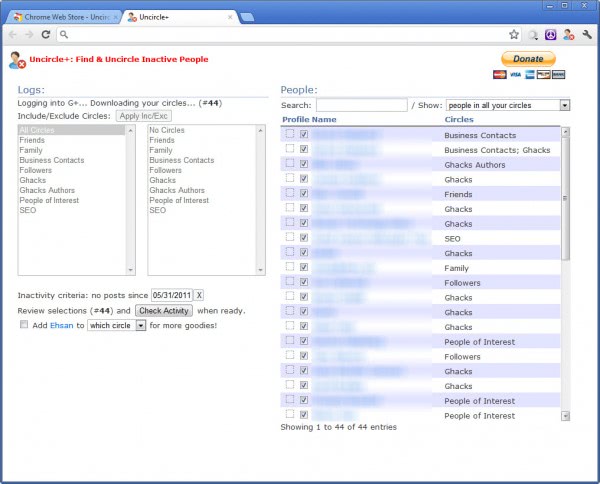 You find the circles on the left, and you can now either select all circles to scan every friend on Google+, or select circles to ignore users in circles that are not selected. This way you could avoid kicking off family members or co-workers for instance even if they are not active on the site.

The selected date, which you can change easily in the interface, defines whether a user on Google+ is listed as inactive by the extension. All inactive users are then displayed in list form on the page, with options to remove all or only select users from your circles.

Uncircle Inactives+ is a handy Chrome extension for Google+ users who want to remove inactive contacts from their profile.

Update: the browser extension is no longer available, it appears to have been removed from the store. At the time of writing, there are not alternatives available that you could install and use instead.