Why You Should Turn Your Game Consoles Off - gHacks Tech News
ghacks.net

Why You Should Turn Your Game Consoles Off

I have a Nintendo Wii, a Sony Playstation 3, and a Microsoft Xbox 360 at home, and while I'm not using them that much, I have come to enjoy what the current generation of gaming consoles have to offer. A recent study about game system energy efficiency shows that U.S. households could save 1% of residential electricity consumption if consoles would be turned off or put to standby instead of left idling.

It needs to be noted that this is an estimate by the research team, as information about the ratio of users leaving their gaming system idle are not available at all. According to the study's estimates, idle systems account for more than 70% of total game console electricity use, and elimination of this behavior could reduce the overall consumer electricity bill by 1 Billion Dollars annually.

When you look at the facts, you will notice that some gaming systems have a higher power consumption than others. Microsoft's Xbox 360 and Sony's Playstation 3, while effective under standby, consume nearly as much power in idle when active. While that's also true for Nintendo's Wii, the system consumes only a fraction of the power that the other two systems consume (about 1/7th in comparison to the newest models). 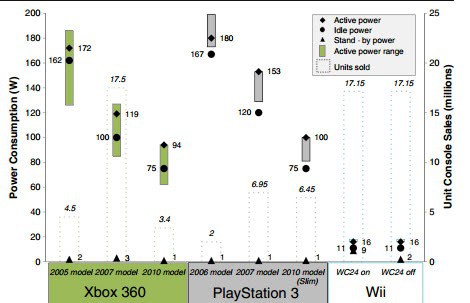 It is even worse for older models, that use almost twice the energy of the latest model when active or idle.

Turning off game consoles when they are not in use, has a significant impact on the household's overall electricity consumption.

The authors suggest that standardizing auto-shutdown options - which both the PS3 and Xbox 360 offer - could reduce the energy consumption of game consoles significantly. Playstation 3 users need to enable the feature manually.

Scroll all the way to System Settings and select Power Save Settings in the menu. Locate Systems Auto-Off, and select an appropriate value. Available for selection are after 1,2,3 and 5 hours, or off.

There are situations where users may not want their system to be turned off. Maybe they are currently playing in a game and don't want to lose their progress, or maybe they are participating in Folding at Home or a comparable project.

The majority of users on the other hand benefit from turning off their gaming systems financially. Plus, they reduce the total energy requirements of their country as well.