by Martin Brinkmann on March 26, 2012 in Software, Windows - No comments

The Windows control panel is one of the central hubs of the operating system. It links to administrative tools, lets you maintain your system or troubleshoot it. Third party applications can - and will - add their own icons to the control panel which in itself is not a big issue. Examples of programs that do that are Oracle's Java, Adobe's Flash Player, or Nvidia with its control panel.

When you uninstall those programs later, it can happen that their icons in the control panel stay behind. That's only the icon then with no functionality attached to it anymore.

Visual Controls was created back in 2008 to give Windows users an option to remove third party control panel applets from the operating system again. You can use the software to remove leftover icons or to remove icons from existing programs that you do not want to appear in the control panel.

You can start the program right after you have unpacked it on your system. It requires the Microsoft .Net Framework 2.0 or higher to run, which is a given on the majority of operating systems it supports The new version is now fully compatible with Windows 7, and Vista, XP and even Windows 2000. The developer has improved compatibility with older versions of Windows as well in this release. Please note that Visual Controls requires administrative privileges to run.

The program lists all third party control panel applets in its interface once you have started the application. 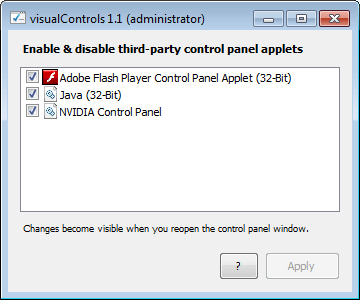 Just uncheck the applets that you do not want to see anymore in the control panel, and click the apply button afterwards. Applets are listed in alphabetically order, another change in the new version. Once you hit the apply button you will notice that the selected items have been removed from the control panel. You can add them again at a later time by repeating the same steps.

The developer has added several command line arguments to the app which extend the functionality further. You can use the command --enable-global-mode to disable select control panel applets for all users of the system, and --disable-blacklist to display first party applets as well. Both options can be extremely useful for system administrators.

The developer has improved Visual Controls significantly. Better compatibility, and the command line options are especially noteworthy in this regards.