Humble Bundle 2 Launched, 4 Indie Games, Pay What you Like

For me, gaming has changed a lot in past years. While I was always a fan of great freeware and indie games, I never found them to be my main source of entertainment. With publishers and game developers like Electronic Arts or Activision Blizzard concentrating on releasing one sequel of a successful series after another, I started to move away from buying a lot of full priced games, as games became repetitive and boring.

I was able to do that mainly because independent games became more professional, and popular at the same time. Games like Terraria, Minecraft or Magicka cost a fraction of full priced games, and guarantee the same fun, if not more, that those full-priced titles offer. The situation is improving further with game developers and smaller publishers pitching for crowd funding at Kickstarter, where I have helped fund four games in the past months.

The Humble Bundle 2 allows you to get a collection of four indie games for a fair price. The cross-platform bundle, supporting Apple Mac, Windows, Linux and Android, lets you buy those games for a price that you deem fair for it. Yes, you could pay $0.01 to grab the four included games, but that would not necessarily be a fair price for the bundle, would not it? It would also mean that you would not get the fifth game included with the bundle, as you would have to pay the average to get that. Lets take a look at the games. 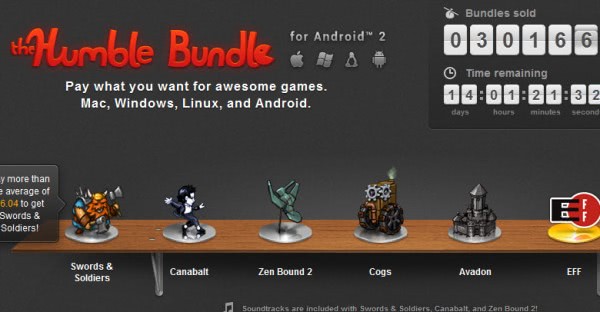 The four cross-platform games available as part of the bundle are the following:

Gamers who pay more than the average price get a license for Sword & Soldiers in addition to the other four games. Here are introductory videos for each game:

These videos should get you a great overview of what each individual game has to offer. Games are offered as direct downloads after the purchase, or as licenses for Steam where they can be unlocked.

When you make the purchase, you furthermore can select how the contribution is split up between the game developers, charity and the Humble Bundle creators. The charities included in Humble Bundle 2 are the Electronic Frontier Foundation and Child's Play Charity.

The average purchase amount at the time of writing has been $6.04 which is not much when you consider that you are getting five games for that amount of money.