Windows users have plenty of options when it comes to pdf readers. From Adobe's official Reader application, to built-in reader support in the Chrome browser, or the bare-bones Sumatra PDF. When Windows 8 ships, users can also make use of Windows Reader, which supports pdf documents.

But sometimes a reader alone may not be enough, which is when you start looking for a program with more bang. If you do not want to pay for a product like Adobe Acrobat, you could try a free alternative like Nitro Reader. While not offering the same feature set as commercial alternatives, it comes with options that many free readers do not come with.

The developers of Nitro PDF have just released a new version of the program. Nitro PDF Reader 2.3.1.1, available as a 32-bit and 64-bit program for the Windows operating system, improves the program's memory usage significantly when the program is running and rendering pdf files. 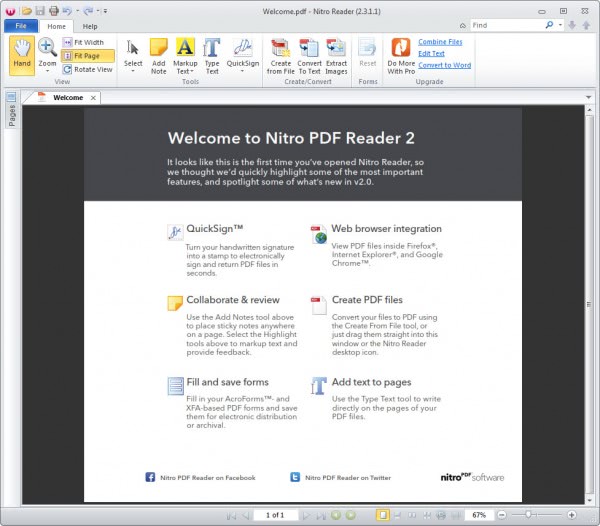 The memory consumption is still not comparable to lightweight solutions such as Sumatra PDF which uses considerably less than Nitro PDF Reader. It appears that Nitro uses about three times the memory that Sumatra uses.

Still, in return, you get an advanced feature set that may be worth the extra memory. The following features and enhancements have been added to this version of Nitro PDF Reader:

In addition to that, more than a dozen issues have been resolved, including a font rendering issue with Adobe Custom Encoding fonts, and a pixel artifact issue when highlighting link text.

You can grab a copy of the latest version of Nitro PDF Reader at the official website.