Games that take you on a journey seem to have become popular in recent days. First the release of Dear Esther which some says is a master piece, and others boring as hell, then Journey for the Playstation 3, and now Hubris. Hubris, unlike the other two games mentioned here, is a freeware game that you can download and play if you have access to a Windows PC. The game uses Unreal engine technology, and requires installation before you can get started.

The game itself is even more minimalistic than Dear Esther, as it comes without narratives or interaction. The only controls that you have are the wasd (or cursor) keys to walk. The only other control that you have is the mouse, which you use to look around in the game. You do not see who is walking, or understand why you are where you are. The game itself is more about the visuals, which probably remind you of ancient Egyptian structures, as the game has a particular sandy feeling to it. 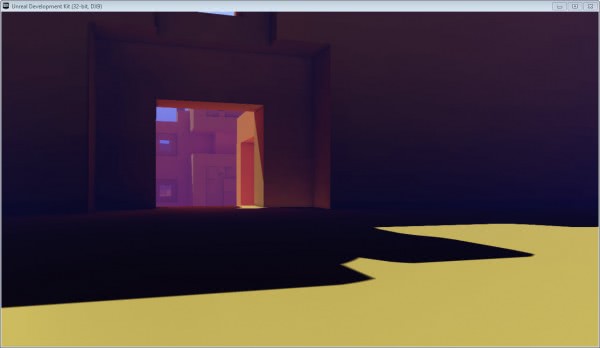 Sound-wise, there is only the sound of wind, no background music or other distracting effects that might irritate you or get you out of this meditation-like state you are in when walking around. The game itself can be very soothing and calming, if you let it get to you.

If you do not, you probably do not see a reason installing and playing it in the first time, as it is definitely not one of those action games that throw new stuff at you every ten seconds or so.

You cannot die in the game, but you can fall and need to restart. The game itself is rather short, and it appears to end rather abruptly after a while. It opens up in a window with no options to go fullscreen. As there is no menu or interface, your only option to get out is the Windows key.

If you are interested in the game, you can download it from the Indie Database. It has a size of about 250 Megabytes. Here is a video of the game in case you need more visuals to make a decision about that.