How To Turn Chrome or Firefox Into A Single-Site Browser - gHacks Tech News
ghacks.net

How To Turn Chrome or Firefox Into A Single-Site Browser

A Single-Site browser serves a very specific purpose. You use it to access one, and sometimes a handful, of websites and services on the Internet. This can be financial sites, your email accounts or other sites with personal information like a medical related sites. The basic idea is to block access to all other sites to protect the account and information from certain attack forms like cross site scripting or clickjacking.

All connections are blocked except to those sites that you have explicitly allowed. This means that third party scripts won't be loaded if they originate on a non-whitelisted domain, and that you won't be able to open third party sites manually in the browser.

This guide demonstrates how to turn Firefox and Google Chrome into a single-site browser. Inspiration has been taken from Vasa's post over at the Wilders Security Forum.

Google Chrome users can make use of the --host-rules parameter to block all domain connections except the ones they whitelist. The general parameter looks like this:

This redirects all connection attempts to localhost, except for connections to the ghacks.net site or one of its subdomains.

You can also add multiple inclusions in the following way:

Windows users can add the parameter to Chrome in the following way: 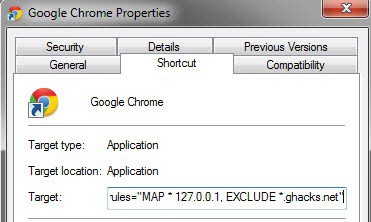 You could alternatively create a second shortcut to use it for accessing your important sites, and keep the general shortcut for all other sites that you visit in the browser.

Mozilla Firefox users need to install the SimpleBlock extension for their browser first. They then need to create a SimpleBlock.ini file in the user profile folder and add a regular expression to it to allow access to certain sites.

This would allow access to the three domains mentioned above, and block all other connection attempts.

It is probably best to create a new user profile for this. You can use an add-on like Switchy or the new Firefox profile manager application.

It is best to create new profiles or shortcuts to work with Single-Site browsers. Security add-ons like NoScript can mitigate the issues if they are configured properly.

Martin Brinkmann is a journalist from Germany who founded Ghacks Technology News Back in 2005. He is passionate about all things tech and knows the Internet and computers like the back of his hand. You can follow Martin on Facebook or Twitter
View all posts by Martin Brinkmann →
Previous Post: « Quitomzilla For Firefox Helps You Quit Smoking
Next Post: Mute Firefox With A Single Click »