FotoForensics Indicates If Photos Have Been Digitally Modified

The rise of digital cameras and the move to digital photo formats made image manipulations a lot easier. Now everyone can fire up Photoshop or a comparable tool to make modifications to photos that are not detectable for the human eye. Often, this is used to optimize the output, e.g. increase an area's brightness level or remove a mole from a face.

Some use it for larger scale modifications, for instance by removing people from images or placing other objects in photos. That's not an issue if this is disclosed, but that is usually not the case. This is especially important in advertisement, as it may give you the wrong impression of a product.

Back in 2010 I reviewed the Error Level Analysis web service that you could use to analyze photos for modifications. It appears that this service is being shut down soon.

FotoForensics has been created to fill the gap that it is leaving on the Internet. The new service improves upon the old in several ways. It supports both jpg and png image formats, and allows you to not only upload a photo from your computer, but also to analyze a photo that is already hosted on the Internet.

All you need to do to get started is to select either option. The program processes the selected image and displays its results on the next page. 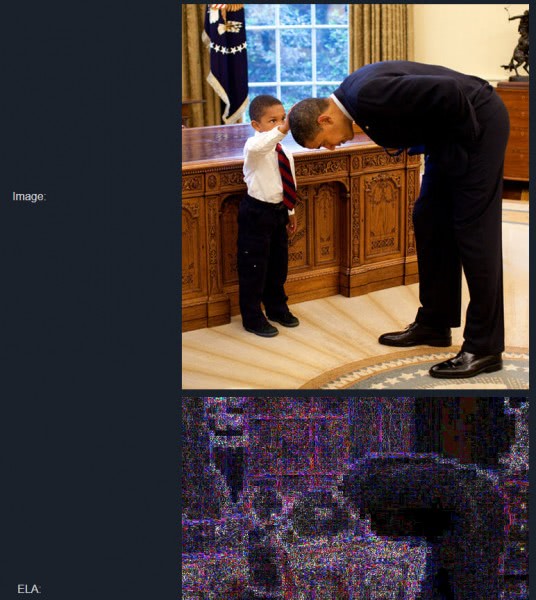 This won't do you any good if you do not know how to interpret the results.

JPEG images use a lossy compression system. Each re-encoding (resave) of the image adds more quality loss to the image. Specifically, the JPEG algorithm operates on an 8x8 pixel grid. Each 8x8 square is compressed independently. If the image is completely unmodified, then all 8x8 squares should have similar error potentials. If the image is unmodified and resaved, then every square should degrade at approximately the same rate.

ELA saves the image at a specified JPEG quality level. This resave introduces a known amount of error across the entire image. The resaved image is then compared against the original image.

If an image is modified, then every 8x8 square that was touched by the modification should be at a higher error potential than the rest of the image. Modified areas will appear with a higher potential error level.

A good getting started guide is the tutorial on the Foto Forensics website that demonstrates different modification levels with sample photos.