Mozilla is about to release Firefox 12 Aurora, after releasing Firefox 10 Stable and Firefox 11 Beta in the last two days. It is interesting to note that Firefox 12 is already offered on the Mozilla download website, but not through the browser's internal updater. Firefox Aurora users who do not want to wait can download the latest release from there to update the browser directly. It is not clear at this point in time why it is taken Mozilla that long to get Aurora installations to pick up the new version automatically.

The release notes, as usual, list only a handful of changes that have made it into the new version of the browser. At the top of the list is an improvement for Windows users who can now update Firefox easier thanks to one less User Account Control prompt during installation of the update. 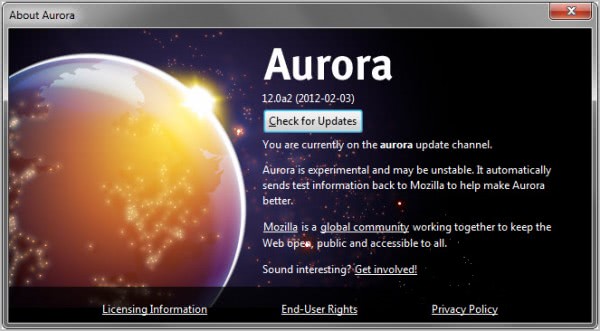 The second new feature in this version of the browser is the new line numbering of the page source code. This is actually a pretty useful features for developers as it improves the source code's accessibility significantly.

Developers can now also use the column-fill and text-align-last CSS properties which the Mozilla developers have implemented in the browser. In addition, experimental support for ECMAScript 6 Map and Set objects have been implemented.

Aurora users should pay attention to the known issues listing as well. Some Gmail users may for instance experience scrolling issues in the main Gmail window under this particular release.

Developers should take a look at the Mozilla Hacks article on the new release which highlights development related changes in Firefox 12.

Previous Post: « NOverflow for Firefox Makes Sure Your Tabs Stay Visible All The Time
Next Post: « How To Uninstall Firefox Add-ons With No Remove Option