Color Pic-a-Pix is an addictive online puzzle game that is more or less a spin-off of the Japanese Kakuro puzzle game. The core difference is that numbers have been replaced with colors. Here is what this game is all about.

Each game consists of a set number of rows and columns, and color hints that indicate the position and length of each color in the row or column. Two black and one brown for instance indicates that you need to fill two black squares first and then afterwards a brown square. It is now up to you to find the starting position of the first and second color.

The game mechanics sound simple but it may take a test game or two before you get a feel for the game play. 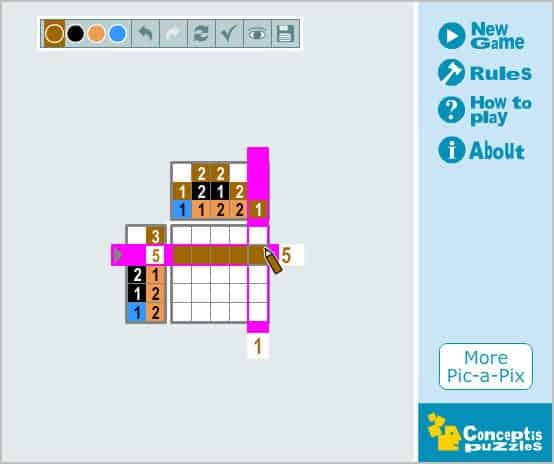 A list of 30 different puzzles are provided by the game, sorted into three difficulty levels. The first ten puzzles are played on a 5x5 grid which makes them easily solvable. It becomes slightly more complex and difficulty once you hit level 2 with its 10x10 grid and level 3 with 15x15.

You need to click on the colors at the top, or use the shortcuts 1-4 on the keyboard, to switch colors. A left-click paints the selected color into the field on the grid. A second left-click removes the color and replaces it with an empty field marker which you can use to keep track of fields that you believe do not contain a color.

The top bar offers back and forward options, a restart button, a check button that checks if the current colors are correctly placed on the grid, and a solution button which displays the resulting picture (and ends the game).

Players should take a closer look at the color information when they start a new map. Some are large enough to fill the whole row or column which makes them a good starting point. It becomes more difficulty in later levels though, which makes rare colors and empty fields the best starting option.

Color Pic-a-Pix is a great little puzzle game, ideal for a short break and for users who like to to try something different for the change.

Martin Brinkmann is a journalist from Germany who founded Ghacks Technology News Back in 2005. He is passionate about all things tech and knows the Internet and computers like the back of his hand. You can follow Martin on Facebook or Twitter
View all posts by Martin Brinkmann →
Previous Post: « Hands of War Tower Defense [Game Saturday]
Next Post: Command & Conquer Remake In HTML5, JavaScript »