Google Health Retired, How To Export Your Data

Google Health was a centralized health information service that allowed users to manually or automatically upload health records to the service. It acted as a management central for those records.

The service provided users with a health record summary, background and related information, as well as interactions between drugs, allergies and conditions.

Google Health became publicly available in 2008, received a redesign in 2010 and was finally shutdown on the first of January 2012.

While they didn't scale as we had hoped, we believe they did highlight the importance of access to information in areas where itâ€™s traditionally been difficult.

Internet users who try to open the Google Health website right now will notice a service announcement on the login page. 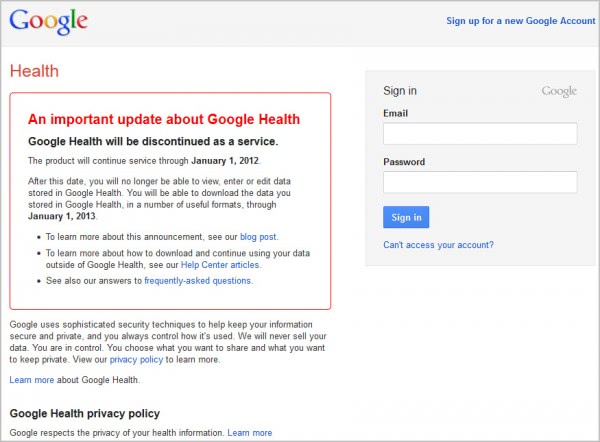 The notification links to the official service discontinuation announcement, information on how to download health records that have been uploaded to Google Health, frequently asked questions and a link to the privacy policy. The latter could be interesting for Google users who have uploaded health records to the health site. Google notes there that the company won't "sell, rent, or share your information".

Google Health user data will remain online until January 2013 when it will be deleted permanently. Google Health users have one year to export their data, either for safekeeping or importing into other health services such as Microsoft's Health Vault.

A support guide explains how users can export their profile data.

Why has Google Health failed? Google mentioned that the service did not become as popular as they hoped it would. One of the main reasons, besides being US-centric, was that the service did not really offer that much besides the ability to collect health records on the website. The provided information were also publicly accessible on the Internet, and privacy must have been a concern for many users.