Minecraft is one of those games that does not try to persuade gamers with lots of eye candy and stunning visuals. The game's mass appeal can be attributed to its game play mechanics and freedom that it gives its users. Markus Persson, the developer of Minecraft recently stepped down as an active developer of Minecraft leaving the game in the hands of dedicated developers.

He developed the game Minicraft for the Ludum Dare 48 hour competition. Minicraft is more or less a browser based 2D version of Minecraft (or the comparable game Terraria). 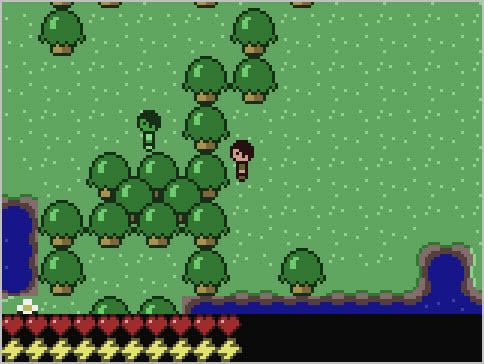 In short; the game is all about resource collecting, building and fighting in a 2D environment. Your first task is to collect resources to build the workbench. Better tools can be built when you have the workbench at your disposal. The first resource that you come upon is wood, but you will later on discover other resources like stone to create different kinds of items.

You move the player with the arrow keys, use c or space to attack or collect resources, and x to open the inventory and to interact with objects in the world.

According to the developer, the end goal is to "kill the only other sentient being in the world, making sure you'll be alone forever".

Minicraft is an excellent game considering that it has been developed in 48 hours of time. Grinding, that is repetitive resource collecting and killing of zombies, makes a huge part of the game. This may not be to everyone's liking.

Regardless of that; Minicraft and Terraria players will feel at home right away. They are also the likeliest candidates to spend lots of time in the game.

Here is a video of the game

Minicraft is a Java based game. It is available as a web browser version or download version. The latest Java Runtime Environment is required in both cases. The source code and a small development journal are also available on the Ludum Dare website.