What would you say about a service that monitors and records a huge percentage of worldwide torrent traffic and makes it available in a public database?

The idea behind You Have Downloaded is fairly simple. The service monitors world wide torrent traffic and adds all information that it finds to a database. The developers of the service state that they have records for more than 52 million users, nearly 2 million files and more than 110k torrent files.

The site will automatically check the IP that you are connecting from against the database to provide you with information about the downloads that have been recorded for that particular IP address. 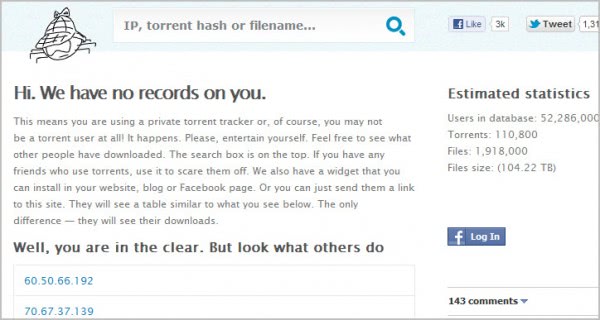 You Have Downloaded lists all files that users behind that particular IP address have been downloading. This includes the name of the files, their size and the month and year in which it happened.

A search is provided that offers additional search and filtering options. It is for instance possible to search by IP address to find out if torrents have been downloaded by a particular IP address, by torrent to see all IP addresses that have downloaded the files or by filename to see the same information. The result pages list the trackers users have used to download the files from as well.

Users with dynamic IP addresses may see torrents that have been downloaded by other users of the Internet Service Provider in the past. The developers do however point out that they grab machine fingerprints using DHT and time stamps to link downloads directly to a particular computer system. Not all of the information are however displayed on the public site frontend.

Baby, this is the Internet. There is no such a thing as privacy around here.

If you ask me, there are two scenarios for the service's future. It first might be taken offline once the developers recognize that traffic does not pay for itself. The second possibility is that they are contacted by media representatives who would like to buy the database and technology.

Just head over to You Have Downloaded to see if they have records about your current IP in their database.