A recently conducted and published browser security comparison by Accuvant Labs comes to the conclusion that Google's Chrome browser is more secure than Firefox and Internet Explorer.

The researchers looked at specific browser security technologies and their implementation in web browsers.

That's an analytical what-if approach, and fundamentally different from analyzing a browser's vulnerabilities in the past.

Only the most recent versions of Microsoft Internet Explorer (9), Google Chrome (12 and 13) and Mozilla Firefox (5) were analyzed. Other browsers, like Opera or Safari, were not included in the research.

The results and areas that have been analyzed in the study are displayed in the table below. 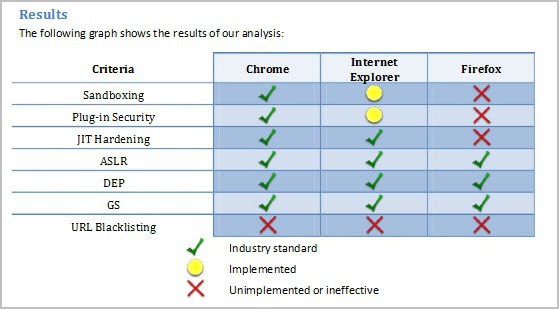 Here is the conclusion of the research paper.

Neither the fact that the research was sponsored by Google, nor the missing definition of industry standard disqualifies the research paper immediately. It is however something that needs to be addressed and looked at.

It needs to be noted that core browser security plays just a part in a user's threat protection. Other factors include the operating system, up-do-date plugins and browser versions, browser extensions or security software.

What's your take on the research paper?