This new free software package is an all in one stop to help you speed up you PC in many different ways. There are built-in suggestions to fix registry errors, defragment drives and much more. This package looks at the overall health of your system and reports the perceived health on the main window. You are kindly greeted with a friendly bright user interface. There are also a few popups indicating fun facts such as your PC boot time is faster than X% of the population of the planet.

The top of the interface allows you to do a basic checkup, cleanup and speedup. It has security tools and an app manager as well.

Beneath this toolbar, you will find a quick synopsis of your systemâ€™s performance with regard to CPU load, upload / download speeds, CPU temperature, memory usage and disk access speed.

Under this area you can pick from a predefined set of features such as Game Turbo Booster, Duplicate file finder, Password Manager, File Recovery, Startup Optimizer, and Process manager. 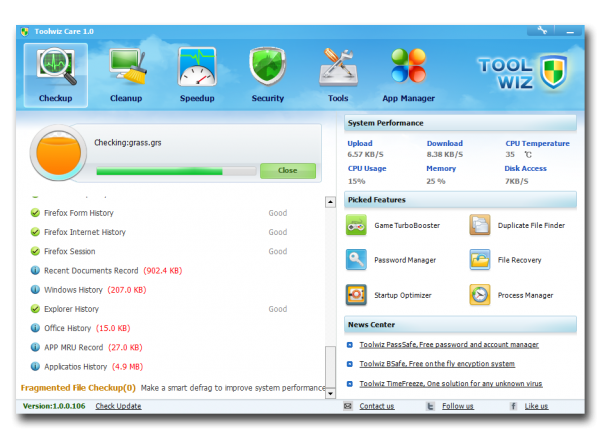 You will find an overlay running while you have this software up and running. It will show you at all times the current upload and download rates.

The left side window where most of the notifications of your system issues are located you will find a globe. This globe changes in color and level depending on the perceived issues within the system. During use, the program will indicate which file is currently being deleted, moved, copied or defragmented.

Many of the submenu items such as Startup Optimizer have elegant and simple 1 click options that allow you to quickly change many hidden power-user features within Windows.

There is a network monitor that will show you when a program is utilizing your network connection, what it is doing and if you should be concerned. It takes the benefits of a program such as Close the Door and places it within this elegant interface.

There is even an App Manager that resembles the Add or Remove Programs portion of the Windows Control Panel.

There are many other freeware programs out there that cover what this program does. None do it in an interface that is both simple and elegant at the same time. On the surface it appears simple, user friendly and kind of fun. If you dig deeper, you can unlock some very powerful features of this free software package. Have fun! You can download the latest version of Toolwiz Care from the developer website. The program is compatible with 32-bit and 64-bit editions of the Microsoft Windows operating system.