One of the stories that dominated tech news yesterday was that Mozilla started shipping a version of the Firefox browser with Microsoft's Bing search engine as the default search engine instead of Google Search. Some news sites made it look like as if Mozilla dropped Google as the browser's search provider in favor of Microsoft's Bing. That apparently is not the case at all, and the emphasize on version of Firefox should have been clue enough for that.

Microsoft has created the Firefox with Bing website to distribute a special version of the Firefox web browser. This particular version of Firefox ships with Bing set as the browser's homepage, default search engine and search provider in Firefox's address bar.

Internet users who click on the Get Firefox with Bing button are redirected to a download on the Mozilla website. The download pops up automatically, the download itself is the latest stable Firefox browser version. Users who install the latest stable version of Firefox this way will use Bing instead of Google in the browser.

This does not really change anything else. Firefox versions available for download directly at Mozilla will still ship with Google as the default search provider. And that's the place where most Firefox downloads happen. 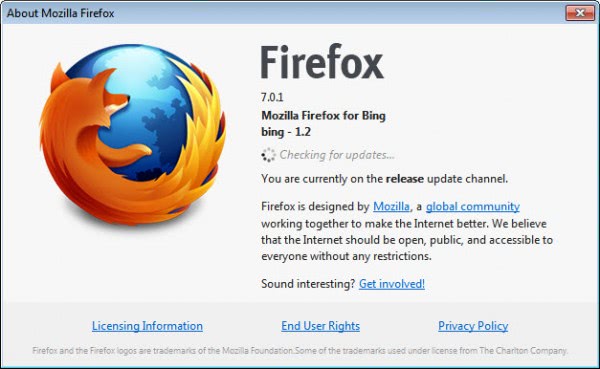 It is up to Microsoft to promote Firefox with Bing, and it remains to be seen if a lot of users will take up Bing's offer and download the Bing Firefox version from the promo page.

Existing Firefox users can install the Bing add-on for the browser instead to add the same functionality. If you do not want to install and add-on for that, you can head over to the Mycroft Project website instead to pick search providers from the list there.

So, Mozilla is teaming up with Microsoft, and probably rewarded handsomely for it. Some may see the move as a first step to become less dependent on Google, which in my opinion is a path that Mozilla should have taken a long time ago.

You can read the official announced over at the Bing Community blog.