Virtual Files uses a similar, albeit slightly different, technique. The program creates a virtual drive on the operating system after installation. This drive is accessible and manageable via Windows Explorer just like any other drive on the system.

The core difference to existing drives and folders is that it only stores virtual copies, or file references if you prefer, of files and folders. The idea here is to give Windows users an option to add virtual copies from as many folders and storage locations as they want to optimize and speed up the workflow and improve accessibility.

Users could create a photo folder and fill it with virtual copies of all their photos, regardless of their storage location on the operating system. The very same option exists for other data types as well, documents, movies or web development files.

A left-click drag and drop is blocked by the application due to lack of physical storage space. 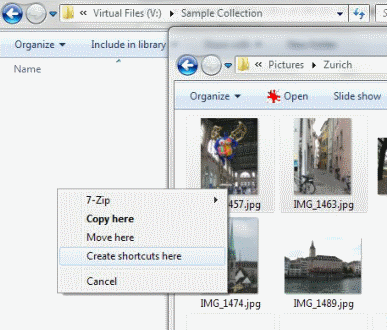 The configuration itself is not overly comfortable, especially if files are stored in many different folders on the system as it is not possible to create virtual copies of folders via drag and drop.

A frontend to make the initial configuration easier would really improve the application, for instance by allowing the user to select multiple folders and files on a system and their target virtual folder on the virtual drive.

Regardless of that; Virtual Files is an interesting application, especially for Windows users who like to access files from multiple storage devices and locations under one root folder, and users of previous Windows operating system that do not have the libraries feature.

Windows users can download the file management software Virtual Files from the developer website. The software is compatible with all 32-bit and 64-bit editions of the Microsoft Windows operating system.