Twit Cleaner, Sort Out The Garbage Among Your Twitter Followers

I have started using Twitter more regularly in past weeks. Trying to get a good solid message out every day now which links to an interesting news piece. Most of my messages do not link to Ghacks, but to technology news that I find interesting but cannot post about on Ghacks.

I just stumbled upon Twit Cleaner over at David Bradley's blog on the Internet which analyses all the people that you follow on Twitter to sort out the garbage (their terminology).

The service uses OAuth for authorization so that you do not have to give them direct access to your Twitter account login. Your account is also automatically set to follow them, and they will follow you for reporting and support reasons. It is necessary to keep following them at least until the report has been generated. It is then up to you whether you want to unfollow them.

It took a few seconds to generate the report for my Twitter account, but that is probably due to the fact that I'm following less than 20 or so Twitter users. David mentioned that he had to wait about 20 minutes before all of the 2056 Twitter users he followed were scanned.

The program generates a nice summary in the end that sorts Twitter users into groups like "potentially dodgy behavior", "no activity in over a month", "all talk all the time" or "not so interesting".

Below the summary is a list of all Twitter users that have been sorted into one of the groups. You can jump directly to a certain type of users.

The users are then displayed with their profile photo and name. 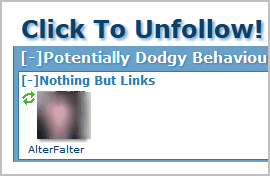 A click on the photo sends that user to the unfollow queue which is then processed in a natural manner.

It definitely pays to double-check the Twitter accounts that are identified by Twit Cleaner as "potentially garbage". Depending on the number of users that you follow, this verification step may take some time.

Twit Cleaner's approach is quite unique, and from what I can tell, works quite well. It does not really make sense to run the service if you only have a few dozens or so Twitter users that you follow, like I do. This changes once that counts reaches hundreds or thousands of users that you follow, as it is likely that at least some of them are not providing useful contents on Twitter.