Amazonâ€™s Kindle device was an instant hit when if first arrived on the scene. Many people were skeptical because they thought a simple device that didnâ€™t even have a color screen, wouldnâ€™t be able to compete with the newer tablet computers such as the iPad. How wrong they were, because as it happens, simple was best, and despite the Kindle only being primarily for one purpose, that purpose was the single most sought after time and space saving device that everyone wanted. It effectively put a whole library of books in the palm of your hand, and without all the baggage and bells and whistles of a complicated tablet computer.

You can, of course, read your kindle e-books on other devices too, but until now youâ€™ve had to download an app in order to read a book on your iPad, or on your computer screen. There have been apps available for PCs, Macs, and every other conceivable device, for you to read your books wherever you may be. You can even read them on your iPhone if your eyesight is good enough! 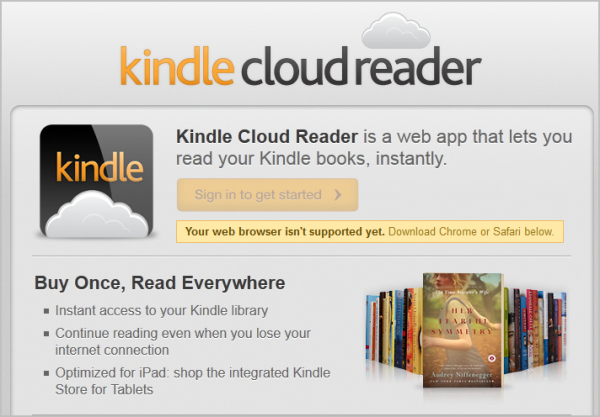 But what was really missing in the Kindle armory was a web-based reader that could be run on anything capable of supporting a browser. With so much going on in â€œthe cloudâ€ these days, it was bound to happen sooner or later, and now you can read books from the Kindle Store, on anything with a web-browser. Whatâ€™s more your Amazon account will automatically track the books you are reading and keep you up to date with your last read page, no matter what device you swap to.

There is another reason why Amazon has gone down the cloud-computing path however, and it has nothing to do with app-friendliness. By using a web-based platform for itâ€™s Kindle store, the application isnâ€™t regarded as a native program. In other words, itâ€™s not a specific iPad app, or an iPhone app. By doing this, Amazon have avoided having to pay the 30% levy that Apple charges for any content sold through itâ€™s devices. Apple announced plans to restrict the purchasing of products from applications running on their smart phones and tablets, and have prohibited links that allowed anyone to sell goods outside the Apple sales system. So Amazon has responded by building itâ€™s Kindle app into a web application that runs on HTML5, and therefore bypasses the restrictions. Clever!

With Apple planning further restrictions in the future, many people are speculating that other companies will follow suit, and soon weâ€™ll see more HTML5 apps being produced than native iPhone apps. Itâ€™s suggested that most companies will not be willing to bow to Appleâ€™s levies, and will seek to develop new web based technologies to compensate for the loss of native apps. In the case of Amazon, why should Apple stand to gain 30% on every book sold via an Apple device? Many people see this as unfair, and they may well be right.

You can access the Amazon Kindle Clouder Reader here. Interestingly enough it is currently only compatible with Google Chrome and Safari browsers.