Turrican was one of those games that made a huge impact when it came out. Originally developed and released for the Commodore 64, it was later on ported to various other systems including the Commodore Amiga, Atari ST and game consoles.

Several factors played an important role in the game's success. First it was the technology, mainly graphics and animations, which were smooth and incredibly advanced on the C-64. The music and non-linear gameplay were two other factors to ensure the great success of the game.

Hurrican is a freeware remake of Turrican for Windows based PCs. It stays true to the original game in many aspects. the game is freely downloadable from the developer website. Be warned though: It plays much better with a gamepad or joystick, and it stays true to its origins which means that it is a tough game. 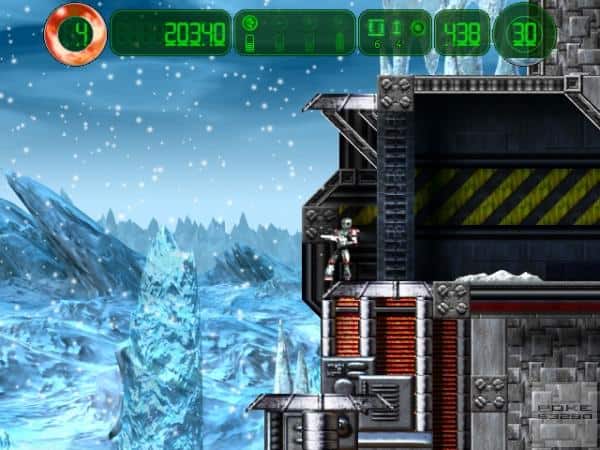 The game can be played alone or with a friend in two player mode. Users on the keyboard will have to use more keys than usual to control the game. You control the character with the arrow keys, shoot with ctrl, jump with alt and use the secondary 360 degrees weapon beam with Shift. It is kinda unusual that the up key makes the character look up in the direction he is facing to shoot bullets in that direction. This takes some getting used to time on the keyboard.

New users should start with the tutorial that explains the game's basics and offers some tips and tricks which will help you in the game. It is for instance possible to shoot faster by tapping on the fire key repeatedly, or to enter ball mode by pressing down and the space key simultaneously.

The game stays true to its heritage. This begins by the fake crack intro and continues with the music, animations, open level architecture and enemies that you come across.

Here is a video of the first Hurrican level.

Hurrican has been released in 2007. The last released version is 1.04 which ships with an level editor to create custom levels for the game. The game tested fine ona 64-bit edition of Windows 7. It should run on other Windows systems as well.

Great game for old school gamers who enjoyed playing the game on the C-64 or Amiga, and new gamers who may have never heard about the game but like these kind of action games (Contra, Metroid anyone).