Google back in 2010 introduced a call phones from Gmail feature in the United States which allowed Google Mail users to use their computer's microphone and speakers to make calls for free to the US and Canada, and for a low rate to other supported countries.

Google has now announced on the official Google blog that they have started to roll out the feature to users from other countries as well. The new feature will be available to 38 new languages, including countries such as Germany, France, The United Kingdom or Canada.

Call Phones from Gmail supports mobile phone and landline calls to over 150 destinations. The service does not charge for connection fees, users pay only for the time they talk and for nothing else.

The rates page can be used to display the international calling rates in a supported currency. Gmail users pay for instance $0.02 per minute to place landline calls to the U.K, France or Germany and $0.10 per minute to call mobile phones in those countries. Update: rates may change, consult the page for up to date information.

The Call Phones From Gmail feature is rolled out in the next days to all supported countries. A green phone icon in the chat area indicates that the feature is available for the account. A click on the phone displays the following informational screen. 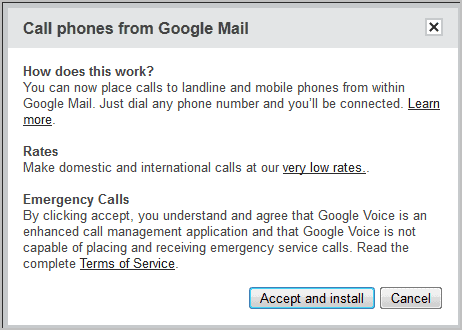 The service is plugin driven, which means that users need to install a plugin before they can start using the service. The plugin is alternatively available on the Call phones from Gmail website as well. The voice and video chat plugin supports Windows, Mac and Linux computer systems.

A call menu is displayed in the lower right corner of the screen once the plugin has been installed. 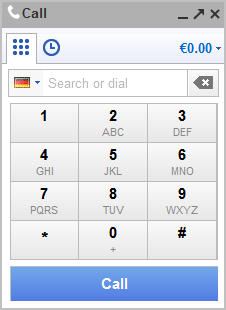 Additional information are available at the official Google blog.