I have to admit that I barely use the Google Mail web interface, as I'm handling all emails in the Thunderbird desktop email client. Sometimes however I have to open the Gmail website, for instance if I'm not at my home computer but need to check or send emails. One of the things that I always found to be missing on Gmail was a better preview of selected emails. Google's email contenders, Yahoo Mail and Hotmail, have a built-in preview feature.

Google yesterday announced the availability of a new Labs application called Preview Pane which adds that missing feature to Gmail.

The Gmail layout does not change automatically after Preview Pane has been enabled. A tooltip on the inbox page guides the user to a button that adds another column or row to the window. Below is a screenshot of the vertical split mode of the new preview pane feature. 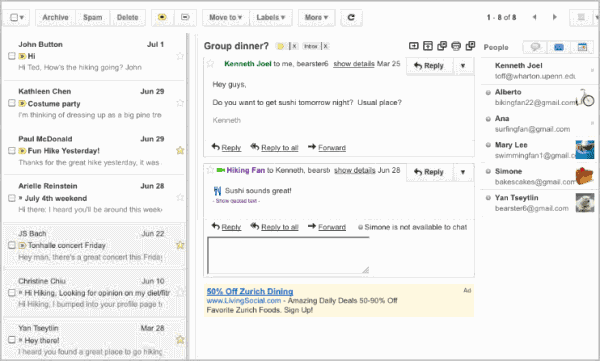 The preview pane column is added to the right of the Gmail inbox. The area is fully resizable, which is done with a click on the divider between the inbox and the preview pane.

A click on the down arrow icon next to the preview pane's button opens a menu with options to switch from horizontal previews to vertical previews.

The selection boils down to personal preferences and the resolution of the monitor. Vertical preview mode has the look and feel of desktop email programs.

Email previews are displayed whenever an email gets selected in the inbox or another mail folder.

But the preview pane adds more than just previewing of emails in the Gmail inbox. It can also be used to quickly reply to the selected email. All controls are available right on that screen.

Gmail users can also hide the preview pane again by selecting the No Split option from the down arrow. 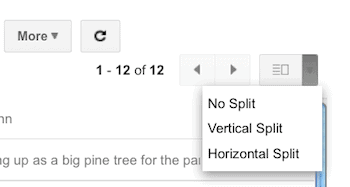 Preview Pane adds a feature to Gmail that has been missing since day one. While it won't entice me to use the Gmail web interface more often, it can surely make a difference for users who work with that interface on a daily basis. (via).

Article Name
Google Mail Preview Pane
Description
Find out how to enable a preview pane on Gmail so that you can preview emails faster on the website of the service.
Author
Martin Brinkmann
Advertisement