In one of the most eagerly awaited broadcasting moves of the year, the BBC have now released their iPlayer app for Apple's iPad.Â  The app is supported in 11 countries and will be a subscription service.Â  The countries supported are Austria, Belgium, France, Germany, Italy, Luxembourg, Ireland, the Netherlands, Portugal, Spain and Switzerland.Â  Australia, Canada and the USA will be supported later in the year.

The release is a one year worldwide pilot of the service and in addition to a subscription at â‚¬6.99 a month or â‚¬49.99 a year, programmes will be preceded by advertisements, something the BBC is not allowed to do in the UK. 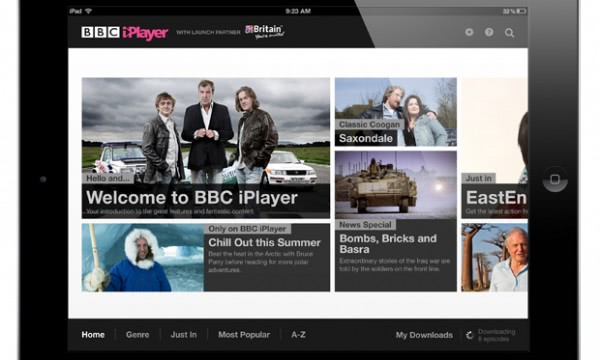 At the time of launch there will be 1,500 hours of content available and this will include content from some other British broadcasters including ITV and Channel 4.Â  The BBC has been very keen to work with other broadcasters in the UK to provide integrated IPTV services.

BBC.com's managing director, Luke Bradley-Jones is keen to stress "[it] is not a catch-up service: this is a video-on-demand service. We will have content from the last month, but also the best from the catalogue stretching back 50 to 60 years."

The delay in bringing the app to the USA has apparently been caused by legal issues with the BBC saying they needed to "jump through a few more of those commercial and legal hoops" before releasing it there.Â  As for a price in the US, a monthly figure of $7.99 has been mentioned which is excellent value compared to the European editions.Â  The US price is set at a level to make the service competitive with NetFlix and Hulu.

At launch the app will feature some facilities that aren't available to UK television licence-fee payers.Â  These include the streaming of shows via 3G.Â  As with their UK counterparts however, people will also be able to download programs to watch later.