Rounds Offers a Fun and Functional Way to Utilize Webcams

Video chat has not met up to the standards that we, the people of the world, hoped it might. The hope was the perhaps webcams could become the way of the next generation and that they would become the prominent means of communication with other people. The telephone would simply be replaced by the webcam. If we needed a doctor, we would just dial them up on our computer and meet with her or him right over the internet. Families would become closer, and even our bosses could dial us up to make sure that we were really sick after calling in.

Well, that is not quite what has happened in the real world. The webcam, sparing a select few business applications like long distance interviewing, has been degraded to a pretty much strictly social tool, becoming the tool of choice for teenage girls to talk to one another when ten feet away and long distance lovers to visit from miles apart. While some remote areas do indeed utilize webcams for doctor visits, most of its other applications have been limited to the less savory sections of the web. In short, the web cam never met its full potential.

There is, however, a quiet company that is attempting to capitalize on this social focus of webcams and utilize it for the better. They call their product line “Rounds,” and it can be applied in several different settings to add a webcam element to different parts of the web. To use the products you do, of course, have to have a webcam set up, and for optimal usage you need a microphone as well.

The main tool in their line is a simple Facebook application that allows you to do various things while sharing them with a friend. Not only can you both watch a video at the same time, but you can watch each other watch a video at the same time. The Facebook application can be found here – it is probably the least practical but most widely used option Rounds offers 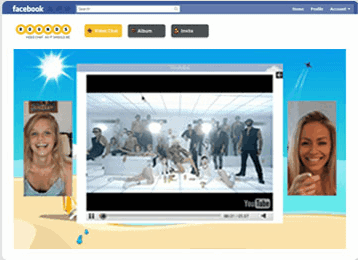 The second option takes several functions that can be done using other websites and applications – like ChatRoullete and Skype – and puts them in a prettier interface. It comprises an entire social community that Rounds would like to flourish, although so far it has not done anything too incredible. It does, however, present some pretty neat things that other networks like Facebook do not, all of which center around webcam activities. The social community website can be found here. 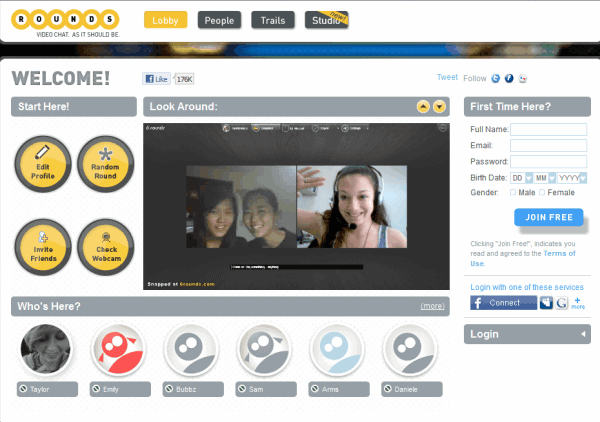 Rounds offers two other options for utilizing webcams in new ways. The first is through a webcam connection service that operates directly through Chrome, allowing you to create contacts and have video conversations just like you might in Skype or a similar program but all through your Chrome browser as an extension. This is probably the best option the company offers – it really does seem to make a quick chat easier. The final is a gadget for the failed Google Wave project. Most people will not find it too useful, but if they are already involved in the project they may want to fiddle with it. The Chrome extension can be found here and the Wave gadget here.

The webcam may never accomplish what we hoped it would. We might as well enjoy what it can do instead.