I think it was Defender of the Crown that got me interested into turn based strategy computer games.

It quickly became a passion with releases of excellent games such as Shining Force, Panzer General, Warlords or Heroes of Might and Magic.

Knights of War is a free turn based strategy game that combines the premise of Defender of the Crown with the turn based battle system of Heroes of Might and Magic. You start out as an English lord in command of a single English region and a measly Axe Men unit.

Your task: become king of course. To do that, you need to get commerce flowing, build structures, armies and do research.

For every region you own, you got one building, recruiting or research action. With only one to start, you are quickly realizing that you cannot do both. You cannot recruit an army, improve your production and income, and at the same time do research for better weapons and technologies. Technologies are researched per region, which means that you may need to research them multiple times if you want them to become available in multiple regions. 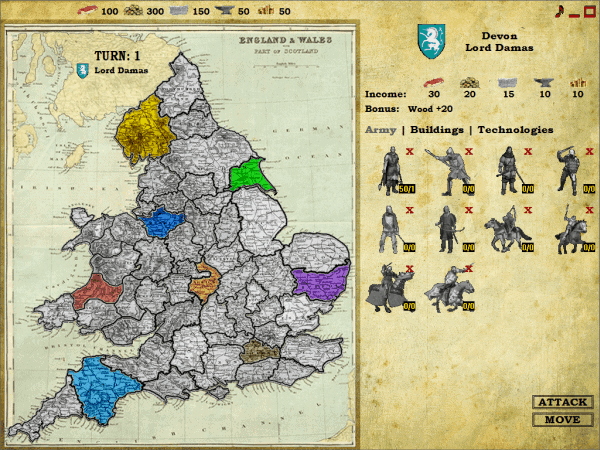 It is up to you to make the right decisions. Will you buy a barracks or archery range to recruit better units to conquer surrounding regions as fast as possible? Or will you concentrate on commerce and research, to improve the resources per turn that you get out of your kingdom? It pays to take a region's bonus into consideration. Some regions can recruit better units while others give advantages to resource generation.

The benefit of having multiple regions is noticeable. You can build additional buildings, divide research among regions and recruit more armies. In addition, you get more income automatically as well. The game makes use of the five resources food, wood, stone, iron and gold. You usually need at least two different resources, most buildings require stone and wood, whereas units require food and gold, and sometimes a third resource.

You can move troops around and attack adjacent regions. It is possible to let the computer compute the outcome of the battle, or move your army manually. You place your troops on the map at the beginning of the battle. Each unit has distinct attack and defense values, movement rates and a range of attack. Depending on the unit type, you can move, move and attack or pass in a turn. 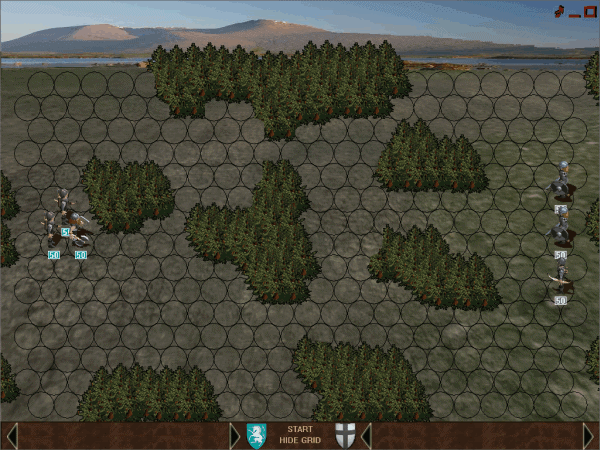 Archers are extremely powerful in the beginning of the game. Once you command many units, that advantage fades, especially with the rise of cavalry units.

Knights of War is an interesting game that can keep you entertained for quite some time. It could use some randomization, like a random starting location for instance. Still, if you like turn based strategy games, then this game may be right for you. You can download the latest version at the developer website. The game is compatible with all recent versions of the Microsoft Windows operating system.