Skype users who use Windows as their operating system may currently receive update notifications when they run Skype.

The update, which displays right after the launch of the voice over IP software Skype on most systems asks the user to install EasyBits Go on the system. Many of the updates characteristics are similar to that of malware that tries to install itself on the system. This update on the other hand is not malware or malicious in nature.

EasyBits is the company that's behind the technology of Skype's game channel, which is one of Skype's Extras. Users who have enabled Skype Extras may get the update notification in Skype. The bad part is that the update will install, even if the user explicitly denies the installation.

Messages began to appear in the official Skype forum yesterday with user reports asking for help and confirmation that EasyBits Go was not malware. Users like Alexander LeClair described the issue they experienced in the following way:

This morning I opened my Skype and an application called Easybit Games Go decided to install itself on my computer without my permission (I am 99 percent sure it was through Skype). Is this a virus coming through Skype? I have uninstalled the software and scanned with Malwarebytes and AVG and both have come back with no infected files. I just want to make sure it wasn't a rogue program. All the help is appreciated. Thank you! 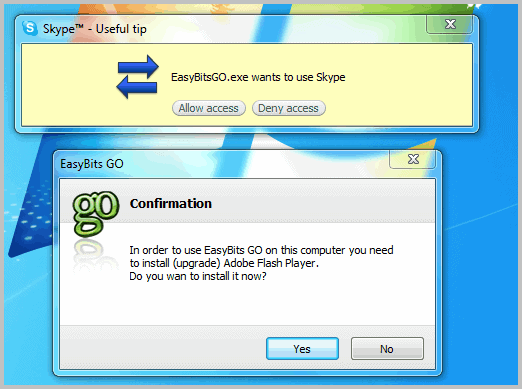 Some users have reported problems when trying to uninstall the new program on their system. The developers of Easy Bits have created an uninstaller for the software that users can run to uninstall it from Windows completely. This uninstaller can be downloaded here.

Other users have disabled the Extras feature in Skype to block the program from within Skype. Uninstallation is on the other hand the permanent solution and it is suggested that users uninstall EasyBits Go completely when they do not want to use the software.

It has to be noted that the update has nothing to do with the Skype sale. EasyBits has been part of Skype since 2006, and the update was scheduled by the company months before the Microsoft Skype deal was announced in the media.

Update: If you do not trust the uninstaller of the company who pushed out the update in first place, you may want to either block it using instructions posted by Nexus here in the comments or a program like Revo Uninstaller to get rid of the program completely.

Article Name
How To Uninstall EasyBits GO (EasyBitsGo.exe) Completely
Description
How to remove EasyBits Go completely from your system if it is installed by Skype.
Author
Martin Brinkmann
Advertisement

Martin Brinkmann is a journalist from Germany who founded Ghacks Technology News Back in 2005. He is passionate about all things tech and knows the Internet and computers like the back of his hand. You can follow Martin on Facebook or Twitter
View all posts by Martin Brinkmann →
Previous Post: « Free Video Converter Kastor
Next Post: Microsoft Standalone System Sweeper »