Many computer users use Wikipedia, or one of its sister Wiki sites as reference when they want to look something up on the Internet. They basically use Wikipedia as an encyclopedia, which is fine, as long as they remember that information on the site may be incorrect due to its "everyone may edit everything" guidelines.

Wikipedia has grown over the years. The largest repository on site, the English language version of Wikipedia has broken the 13 Gigabytes barrier lately, and that's text only. If you add images, you end up at 30+ Gigabytes of space.

Some users may not have Internet access all the time, which means that they cannot access Wikipedia during that time. Maybe you are on Safari in Africa, miles away from the nearest settlement, or on an Island in the Pacific Ocean with less than optimal Internet connections.

I have reviewed quite a few solutions to access Wikipedia without Internet connection. WikiTaxi or Okawix come to mind, or the manual option to install Wikipedia locally. 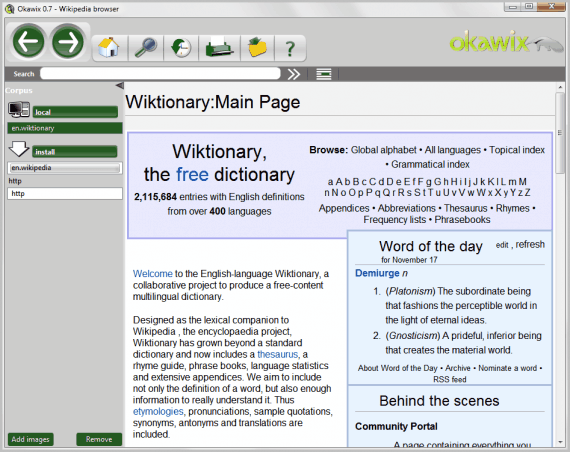 Okawix has been reviewed before at Ghacks, but that review is two years old. The developers have continuously worked on the application, which justifies another review. Wikipedia in this context refers to all official Wiki projects. This includes Wikipedia, Wiktionary, Wikiquote, Wikisource, Wikibooks and Wikinews.

The program is available for Windows, Mac, Linux and the Android operating system. The Android version has not been available back then, and is one of the core improvements.

The offline reader ships without local Wikipedia databases, which means that you need to download at least one on first run. Databases are available as direct downloads in the program interface, and linked as torrents on the program homepage.

A language screen is displayed if you select to download a Wikipedia database from within the program interface. You need to pick one or multiple languages that you want to download first, and on the second screen one of the available Wikipedia dictionaries or encyclopedias. 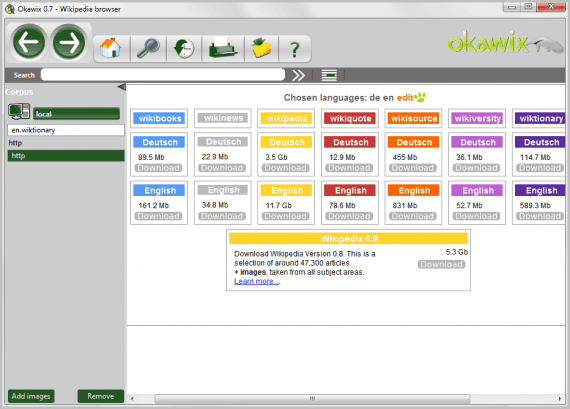 The size of each download is displayed on the second page, ranging from less than 100 Megabytes to Gigabytes of data. A click on Download opens a new screen where the installation directory is selected. You can enable image integration which usually increases the size of the download significantly.

The download is then added to the install group on the left sidebar. Already installed Wikis are displayed under the local group.

Installation depends largely on the size of the selected Wiki, and the Internet connection. A progress bar is shown during installation. You can install multiple Wikis at once, but you need to go back to the selection screen after each item that you have added. An option to select multiple Wikis at once would have been handy. The program seems to look up occasionally during installation.

It is usually easier to download the Wikis as torrents. You only need to double-click the downloaded file to add it to the program database, at least that's the case under Windows.

You can use Wikipedia as you would online once installed, with the exception of account and website related features. You can search Wikipedia for entries, navigate the pages or click on links to be taken to other pages, all without Internet connection

The search is limited to a single Wiki, which you have to select before you begin the search. That's another aspect that could be better.

The software is generally responsive, but feels heavy at times, especially during installation of Wikis.