WikiTaxi takes Wikipedia offline by processing Wikipedia backups and providing a browser like experience. It works by downloading the article backup of the selected language from Wikipedia and importing that backup into Wikitaxi. It is compatible not only with Wikipedia but also with other parts like Wikibooks or Wikinews.

The software program provides a great way of accessing Wikipedia offline. Even the English Wikipedia articles, which are the largest in size, fit on less than 8 Gigabyte of space meaning they can easily fit on USB drives, desktop computers and notebooks.

The only aspect that is not integrated are the images of the articles which would raise the size of the offline archive tremendously. 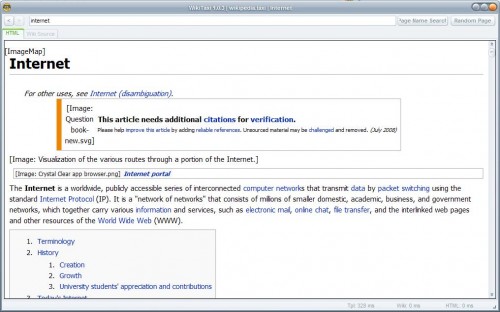 After downloading one of the article backups from Wikipedia and downloading & installing the WikiTaxi software the backups can be imported into the application. Here is the link to the English backup of Wikipedia, probably the one that most of my readers would want to download.

The importer can be started by clicking on the file WikiTaxi_Importer.exe; Just select the downloaded backup and a name for the converted file. It's also possible to assign additional RAM for the process. (it did not seem to have a positive effect though) It took more than 45 minutes to convert the English article directory of Wikipedia on my computer.

Once the import has finished the newly created article index can be loaded into the main application. This can also be done automatically with the command WikiTaxi.exe path-to-taxi-file. That file had roughly twice the size of the backup that was downloaded from Wikipedia.

The interface reminds of a basic browser. Just enter a phrase in the search field to load articles about the subject. All internal links are clickable as long as they point to other articles of the same index.

Ransomware payments are marginal when compared to the overall costs