Upgrade Complete 2 is the sequel to the popular Upgrade Complete flash browser game. Both games add a unique idea to a game that is in its core an arcade shooter. Imagine that you'd start with a basic game and that you had to buy game elements, for instance a play button, music, prettier graphics and the like before they would become available in the game.

In Upgrade Complete 2 you start with nothing, not even a mouse cursor. That may sound intimidating at first but it is actually lots of fun. The developer is nice enough to give you the mouse cursor, but after that it is up to you to purchase the available upgrades to make the game itself more enjoyable.

Or are the upgrades the game, and the shooter is merely a means of accumulating enough coin to purchase them? 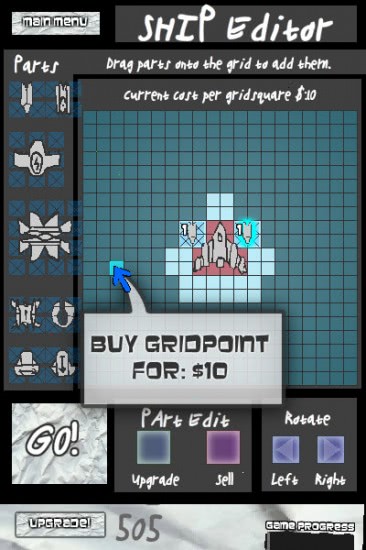 You spend your time in three different game sections. First, the upgrade screen where you purchase new upgrades that change how you perceive the game. You can buy prettier backgrounds, faster loading times, music, options to change the game quality or effects for instance.

Then you come to the spaceship generation screen where you can equip your vessel with weapons, improve its movement or make it bigger to add more stuff to it. This costs coin as well and you need to make decisions if you spend your coin on upgrading the game or your ship.

In the shooting stages, enemy spacecrafts float from the top of the screen to the bottom. You need to take them down and collect the coins they drop. Once a wave completes, or you fail, you can invest those coins in ship or game upgrades.

Here is a basic example of one of the game upgrades. You pay three coin in total to straighten the game. 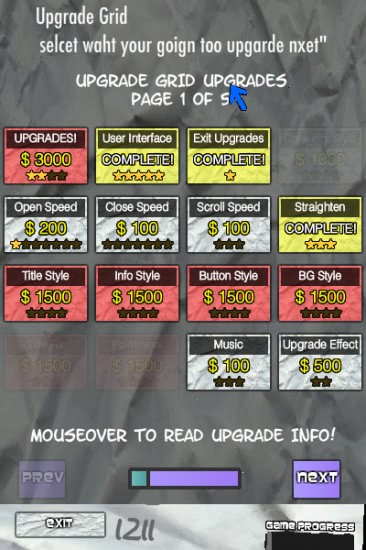 So, you basically need the shooting stages to earn enough money to buy the upgrades to make your game prettier and your spaceship stronger, and to complete the game of course. Your goal is to defeat the final boss of Upgrade Complete 2, but you won't be able to fight until you have bought all game upgrades (and reloaded the game once for a final upgrade). 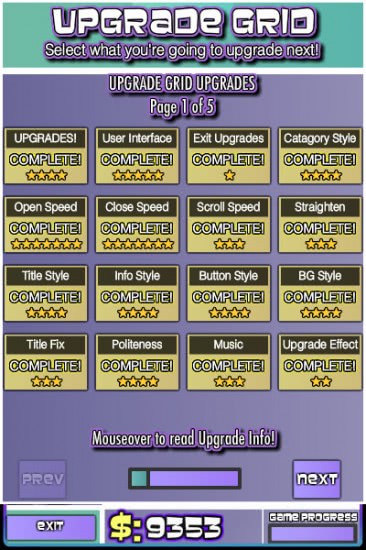 What I like about the game is the unique idea to give the player nothing in the beginning. You really start up with slow loading times, buggy menus, spelling errors, which all go away or improve once you start buying those upgrades.

You can play the game over at Kongregate.