I have to admit that I do not like the ribbon interface that much. You can see it in action in Microsoft's latest versions of Office or Windows 7 applications like Paint or Wordpad.

It is only a logical consequence that Microsoft is now moving from standard menus to a ribbon interface in Windows 8. One of the first applications to get an overhaul is the default file browser Windows Explorer.

Please keep in mind that the following screenshots are a work of progress and that things may change before the final release. 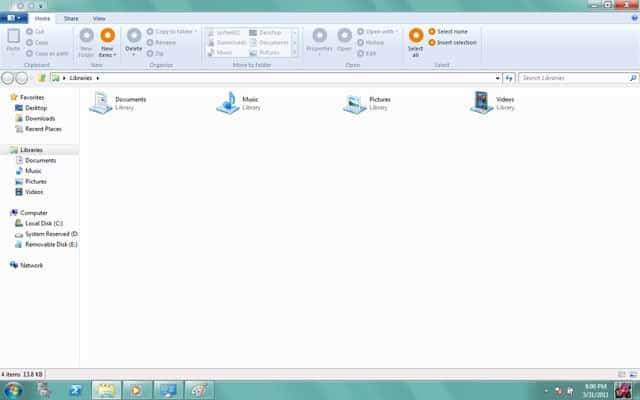 You can see that the ribbon interface has replaced the menubar and previously available toolbars with the exception of the navigational toolbar. It takes up quite the amount of space. I'd estimate that the header space in Windows Explorer had to be doubled because of the new ribbon interface.

If you look closer at the available options you notice that Microsoft plans to display most functions that have previously been accessible via the menubar or the right-click context menu directly in the ribbon interface.

The Home tab for instance offers buttons to create new files or folders, to perform a variety of file operations like deleting, renaming or copying, as well as file selection and opening options.

Part of the ribbon interface is displayed dynamically. A library management tab is added to the interface if a library is selected. A new File button has been placed in the upper left corner of the screen, resembling the file button of Office. A click on that button opens a menu with management options. Here it seems to be possible to pin frequently used places to the sidebar for faster access, to clear the history, access folder options and perform various other tasks.

It is not clear why the frequent places have been added to the menu, instead of the Windows Explorer sidebar where they would be accessible directly without an additional click.

New or inexperienced computer users will likely benefit from the new interface, as many functions are now directly visible on screen and not hidden behind a menu or context menu entry. This may look like a step back for many experienced users on the other hand, considering that they have to give up screen estate for a larger header with functions that they can access faster with keyboard shortcuts or the mouse.

It seems that Microsoft plans to add options to hide the ribbon interface in Windows Explorer, which many users would probably do in a heartbeat.

What's your take on the new interface, aesthetics aside?