The memory management software Minimem was initially developed to limit the memory consumption of the Firefox web browser. The application was designed to keep Firefox's memory hunger in line by "removing as many non-necessary memory pages as possible" from the Firefox process. The application since then has evolved and is now capable of managing all programs and processes running on the Windows operating system.

The developer has just recently released version 2.0 beta which adds native 64-bit Windows support. Users should keep in mind that it is still a beta version and not a final release. 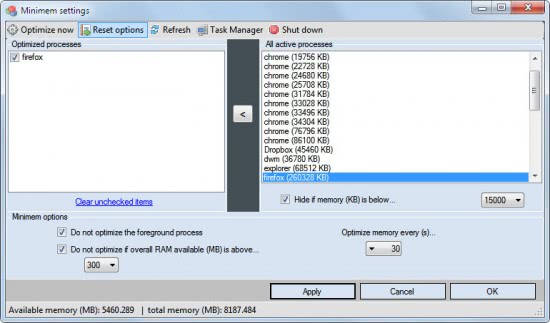 Minimem when started displays the list of running processes on the operating system. It is then up to the user to select the processes that should be optimized by Minimem. The application displays only processes with a memory usage of at least 15000 Kilobytes. Users who want to see all processes can uncheck the option directly in the main interface.

Take a look at the Firefox process before and after the optimization. Please note that the memory will climb again but since the application optimizes the processes every 30 seconds it usually means that the resource usage is lower on average than without the optimization.

Minimem will not optimize the foreground process by default, and not at all if the available RAM is larger than 300 Megabytes. Both options can be deactivated or modified.

So what's new in the beta besides the 64-bit support? Take a look at the changelog below.

Support for native 64 bits Windows OS; separate download file available
Memory colored indicator as tray icon, in addition to memory info in the tray icon tooltip
A last minute bug in this feature also got fixed and the build has been reloaded to our server on January 1 at midnight, EST time.
Localization of the application, with multiple languages available (feedback welcome to improve the translations!)
Engine optimization, so it uses even less CPU
More RAM thresholds available, for more granularity in their selection
Full rewrite of the architecture, hence the beta version because some bugs may still be there

Probably the biggest change is the engine optimization so that Minimem uses less cpu when running. Minimem 2.0 Beta is available from the developer webpage directly. Please take note that it is available as a 32-bit and 64-bit version. The program requires the Microsoft .NET Framework 2.0.