Did you ever find yourself in a position where you wanted to add numbers to a list in a text file? A program like List Numberer would have then been exactly the tool for the job. Sure, you could fire up the text file in an Office suite and add the numbers there but only if you know where to find the options in the application. The portable application List Numberer on the other hand makes it as easy as possible to number a list in a text file.

A preview is displayed immediately once the list has been pasted into the software. The default listing syntax uses the decimal system and adds # in front and ) after the decimal number. 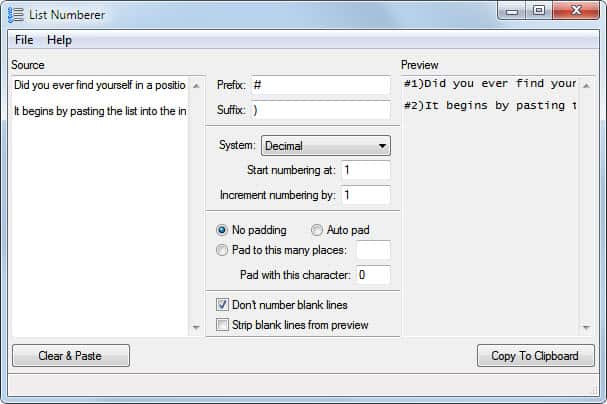 Extra options are provided to define the numbering start and increments, whether blank links should be numbered as well and / or stripped from the preview and if padding should be added to the list.

A click on copy to clipboard copies the processed list to the Windows Clipboard from where it can be pasted into another application or web service.

List Numberer is one of those handy tools that you usually do not need that often, but that comes in very handy if you do. The program is available for download at the Donation Coder forum.