ClearType is a controversial feature designed specifically for LCD displays to optimize the visual text rendering quality of LCD panels.

The technology appeared first in Windows XP and has been integrated into all Microsoft operating systems that have been released after the XP system.

Microsoft has changed the location of ClearType in its operating systems which has added some confusion among users, even though the basic functionality has remained largely the same.

The developer of ClearType Switch decided to create an application to give users quick access to ClearType functionality including options to enable or disable ClearType, and modify its settings.

Users who start the application can enable or disable text aliasing (which is called smooth edges for screen fonts in the Windows options) and ClearType with the click of the mouse instead of having to navigate through menus or going through a wizard before they can do the same. 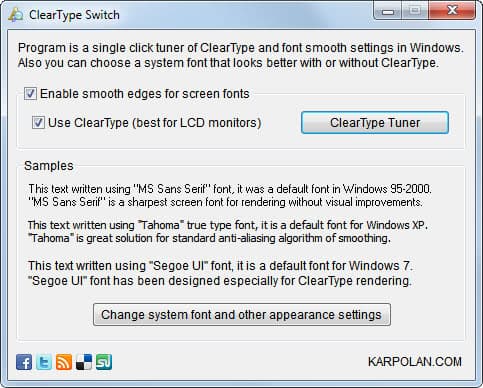 ClearType Switcher links to the internal ClearType Tuner and Windows and Color Appearance control panel applet giving users the option to configure settings offered in those modules as well.

Windows users who are looking for options to change the preferences manually can do the in the following way:

Windows Vista: With Windows Aero enabled (which it is by default), click on "Open classic appearance properties for more color options" in the control panel under "Window Color and Appearance".

Windows 7: You can turn off ClearType only if you follow a wizard that guides you through the set up. Microsoft moved the feature to Control Panel > All Control Panel Items > Performance Information and Tools > Adjust Visual Effects. There you find listed "smooth edges of screen fonts".

Windows 8:  The easiest option to get started is to type "cleartype" when you are on the Start Screen. Select "Adjust ClearType text" and follow the wizard which walks you through the setup. You can use it to turn ClearType on or of.

ClearType Tuner is compatible with 32-bit and 64-bit editions of the Windows operating system. Downloads are provided on the developer homepage.

The program supports command line switches that allow you to turn the font smoothing and ClearType feature of the operating system on or off without opening the program directly. Could be useful to create shortcuts that do that for you if you need to switch between on and off settings regularly.