Users who have been eagerly waiting for a release of Firefox 4 final at the end of this year are in for a hefty disappointed, as the release of the browser has just been postponed to 2011. The milestones have been updated to reflect the changes. According to the new information presented there, Mozilla plans to ship another four beta versions of the browser this year, and the first release candidate in early 2011.

The next official release will be Firefox 4 Beta 7 which the developers want to ship in early November. This version will be the code freeze version, meaning that there won't be any changes from that point on to the interface, apis and features of the browser.

The plan is to engage an audience of more than two million Firefox 4 Beta users from that point on to receive product feedback and sort out bugs, instabilities and security issues before the release candidate ships in 2011. 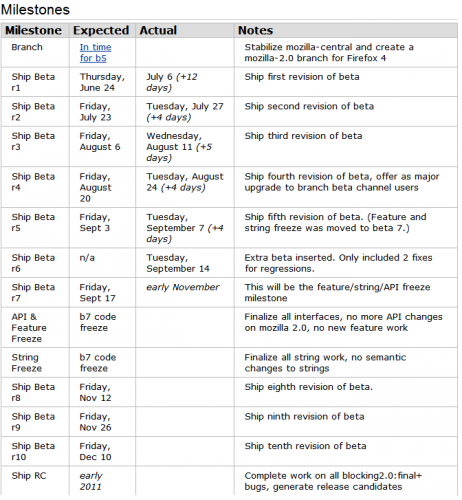 According to Mike Beltzner, the final release of the browser will be close behind the release candidate if all goes well in the development. If not, we may see more delays.

s those who have been tracking our nightly builds know, great things are happening with Firefox 4. The user interface changes are converging, the graphics and layout features are wrapping up, and recently the JavaScript engine was dramatically improved. The result is a fast, capable Firefox that provides better speed and responsiveness for web applications and users. Completing this work is taking longer than initial estimates indicated as we track down regressions and sources of instability. As part of our commitment to beta users, we will not ship software before it is ready.

Development on Firefox 4 has not slowed down and strong progress is being made daily. However, based on the delays in completing the "feature complete" Beta 7 milestone against which our Add-on developers and third-party software developers can develop, as well as considering the amount of work remaining to prepare Firefox 4 for final release, we have revised our beta and release candidate schedule: https://wiki.mozilla.org/Firefox/4/Beta

The frequent beta releases have been extremely helpful in identifying compatibility issues with existing web content, so we plan on continuing to release beta milestones through the end of December. Our estimate is now that release candidate builds will ship in early 2011, with a final release date close behind. Please note that, as always, this schedule is subject to change based on feedback from users and community members.

Take a look at the official Firefox 4 Beta schedule for a closer look at the development milestones. There is also a small faq available that answers some questions that users may have regarding the browser.

It was almost clear that the developer's would not be able to meet the release deadline for the browser. Instead of rushing the product they made the decision to delay the release to sort it out.

What's your take on this development? Let me know in the comments.