Update: Firefox displays link targets on hover in the lower left corner of the browser window now just like other browsers. The add-on reviewed in this article is no longer necessary and has been pulled by its author as a consequence.

You may or may not have read that the Mozilla development team has removed the status bar from the Firefox browser in the latest nightly builds, just like Microsoft did in Internet Explorer 9 Beta, and Google did in Chrome for god knows how long.

Unlike Chrome or Internet Explorer, Mozilla made the decision to place link targets on hover in the Firefox address bar. The two other browsers are displaying the target of links in the lower left corner of the screen exactly where they have been shown before on browsers with status bars enabled.

This screams for problems on low resolution displays and long urls. And while it is just a nightly build that is showing the change, it may indeed turn up this way into the final Firefox 4 release.

Firefox 3 users who have disabled the status bar currently have a different problem as link information on hover are not displayed at all.

The Link Target Display add-on changes that, by implementing a similar functionality that Internet Explorer 9 and Google Chrome offer.

The add-on displays the link url automatically in the lower left corner of the screen. Additionally, it will only display the information if the status bar is hidden. 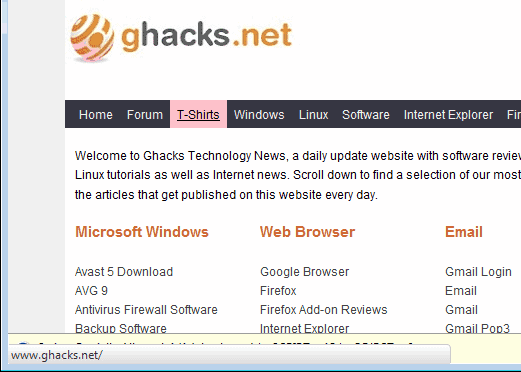 The add-on is compatible with both Firefox 3 and 4, which means that Firefox 4 users will have a fallback in case they do not like the new functionality. That is, if the developer adds options to display the status bar again and hide the link target information in the address bar of the browser.

One aspect of this change, that needs to be considered is that a lot of add-ons places icons in the status bar. NoScript does for instance, and a lot of others do as well. What happens to those icons if the status bar gets removed? Someone suggested to move them to one of the header bars, but those could get really crowed then.

What's your opinion on this? Good change?

Martin Brinkmann is a journalist from Germany who founded Ghacks Technology News Back in 2005. He is passionate about all things tech and knows the Internet and computers like the back of his hand. You can follow Martin on Facebook or Twitter
View all posts by Martin Brinkmann →
Previous Post: « Create Magnet Links Directly On Popular Torrent Sites
Next Post: Firefox 4 Development Update »