IE Tab was a very popular Firefox extension that you could make use of to embed Internet Explorer into Mozilla Firefox.

The main use of this add-on was to make sites compatible in Firefox that otherwise were not without having to switch to Internet Explorer to open those websites.

It was also used by web developers to see how websites would display in Microsoft's Internet Explorer without having to use Windows' default browser for that purpose.

The main advantage here, besides support for all the nice extra features that Firefox ships with, is that you do not have to use two browsers for that purpose.

IE Tab has not been updated since June last year making it not compatible with Firefox 3.6 and later, at least not officially.

That's where IE Tab 2 comes into play. The main difference compared to classic IE Tab is that it has been designed to be compatible with the latest releases of the Firefox web browser.

But the developer's have also fixed several bugs and added new features to the add-on which are outlined when you open the changelog on the developer website.

The developer promise to produce regular updates to keep up with the web browser development. New features and enhancements have also been promised. IE Tab 2 can be downloaded directly from the project page of the add-on at the Mozilla Firefox website.

Please note that the extension is compatible with all recent versions of the Firefox web browser and Internet Explorer. Even if you run a version of Microsoft's browser not explicitly mentioned on the add-on homepage -- it only lists Internet Explorer 7 to 9 -- you will notice that it works fine. 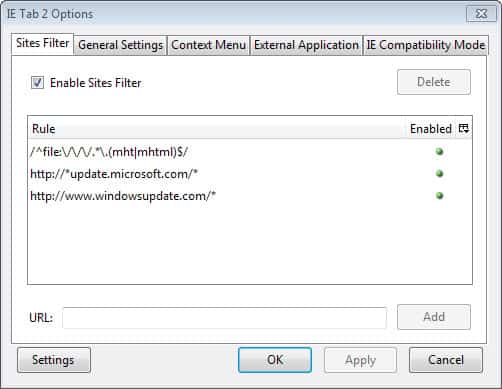 As far as options go, there are plenty of them. You can add sites or extensions to the whitelist so that Internet Explorer will automatically be used when they are loaded in the browser.

There you can also adjust the link to the Internet Explorer executable on the local system. Another useful feature highlighted om the options is that you can use Cltr-Click to open the address in the selected Internet Explorer version directly.

If you are a webmaster who requires Internet Explorer, or work in an environment where some company pages can only be accessed using the default Windows browser, then IE Tab 2 for Firefox is your best option in this regard if you prefer to work with Firefox.

It provides you with all the means to run Internet Explorer right from within Firefox.